Psycho is a 1960 American psychological thriller film, directed by Alfred Hitchcock and starring Janet Leigh and Anthony Perkins. The film is based on the screenplay by Joseph Stefano, who adapted it from the 1959 novel of the same name by Robert Bloch. The novel was loosely inspired by the crimes of Wisconsin murderer and grave robber Ed Gein, who lived just 40 miles from Bloch.

Both Gein and Psycho's protagonist Norman Bates, were solitary serial killers in isolated rural locations. Both had deceased domineering mothers, and had sealed off one room of their house as a shrine to their mother. Both dressed in women's clothing and had multiple personality disorder. However, there are many differences between the fictional Bates and Ed Gein.

The film is often categorized by multiple sources as a drama, horror, mystery and thriller film. The film was nominated for 4 Academy Awards.

The film depicts the encounter between a secretary, Marion Crane, hiding at a secluded motel after embezzling money from her employer, and the motel's disturbed owner and manager, Norman Bates, and the aftermath of their encounter.

Set in Phoenix, Arizona, Marion Crane steals $40,000 from her employer to marry her boyfriend Sam Loomis, and she flees to Sam's house with the money. Along the way, she trades in her car to evade authorities, and during a storm on the trip, she checks into the isolated Bates Motel. The proprietor, Norman Bates, invites her to dinner at his family house on the hill overlooking the motel. When he leaves to prepare dinner, Marion hears him arguing with his mother, who tells him that she "won't have him bringing in strange, young girls for supper." Norman brings dinner to the motel to eat there instead. The two proceed to have a conversation over dinner, topics ranging from taxidermy to Norman's mother. When Marion suggests that his mother be institutionalized, he gets upset, saying he wants to do so but does not want to abandon her. He compares his life to being in a "trap," and observes that this could apply to many situations. Marion agrees with him, telling him that she "stepped into a private trap [back in Phoenix]." Afterward, Marion returns to her room, where she decides to avoid a similar trap and resolves to return the money. Norman, who has become intrigued with her, watches her undress through a hole in the wall, obscured by a painting. After Marion counts the money, she takes a shower. During the shower, an anonymous female assailant enters the bathroom and stabs her to death. Back at the house, Norman calls out to his mother "Mother! Oh, God, mother! Blood! Blood!" He runs to the motel, where he finds the corpse and is horrified. Norman

presumes his mother killed Marion, so he tries to erase all traces of the crime to protect her. He puts Marion's body and all her possessions, including money hidden in newspaper, into the trunk of her car and sinks it in a nearby swamp.

Sam is contacted by Marion's sister Lila and private detective Milton Arbogast, who was hired by Crane's employer to recover the money. Arbogast traces Marion to the motel and questions Norman, who unconvincingly lies that Marion only stayed for one night. Arbogast wants to question Norman's mother, but Norman refuses to give permission, saying that she is ill. Arbogast calls Lila to update her and tells her he will call again after he questions Norman's mother. Arbogast returns to the house, and proceeds up the staircase. Arbogast is attacked at the top of the stairs by a person who slashes his face with a knife, pushes him down the stairs, and then stabs him to death.

Back at Sam's shop, Lila and Sam are puzzled that Arbogast has not returned for three hours, considering he said it would only be an hour. At the house, in an unseen conversation, Norman confronts his mother and urges her to hide in the fruit cellar, theorizing that more people will come looking for both Marion and Arbogast. She rejects the idea and orders him out of her room, but against her will Norman carries her down to the cellar.

Lila and Sam go visit Deputy Sheriff Al Chambers, who is perplexed to learn that Arbogast saw Norman's mother in the window, as he says "Norman Bates' mother has been dead and buried in Greenlawn Cemetery for the past 10 years." Shocked, Lila and Sam realize that the only way to find out the truth is to go to the motel themselves. Posing as a married couple, Sam and Lila check into the motel and search Marion's room, where they find a scrap of paper stuck in the toilet with "$40,000" written on it. While Sam distracts Norman, Lila sneaks into the house. Sam suspects Norman of killing Marion to get her money, so their conversation begins to get heated. He suggests to Norman that he killed Marion for the money so he could buy a new motel. Realizing Lila is not around, Norman knocks Sam unconscious and rushes to the house. Lila sees him approaching and hides in the cellar where she discovers a woman sitting in a rocking chair with her back to her. Shockingly, it is the semi-preserved and mummified body of Norman's mother. Wearing his mother's clothes and a wig and carrying a knife, Norman enters and tries to attack Lila, but she is rescued by Sam.

After Norman's arrest, a psychiatrist tells Sam and Lila that Norman's dead mother is living in Norman's psyche as an alternate personality. After the death of Norman's father, the pair lived as if they were the only people in the world. When his mother found a lover, Norman went mad with jealousy and murdered them both. Consumed with guilt, Norman "erased the crime" by bringing his mother back to life in his own mind. He stole her corpse and preserved the body. When he was "Mother", he acted, talked and dressed as she would, and when Norman's own personality felt affection toward another person, namely Marion, the "Mother" side of his mind would become extremely jealous, and it was under the influence of the Mother psyche of Norman's mind that prompted him to kill her. The psychiatrist concludes that the "Mother" personality now has complete control of Norman's mind.

In the final scene, Norman sits in a cell, thinking in "Mother's" voice.

The final shot shows Marion's car being recovered from the swamp.

Psycho initially received positive reviews, but outstanding box office returns prompted a re-review which was overwhelmingly positive and led to four Academy Award nominations. Psycho is now considered one of Hitchcock's best films and is highly praised as a work of cinematic art by international critics. The film spawned two sequels, a prequel, a remake, and a television movie spin-off. 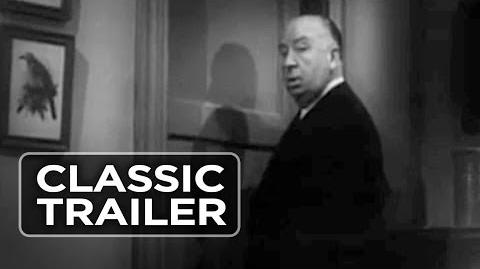 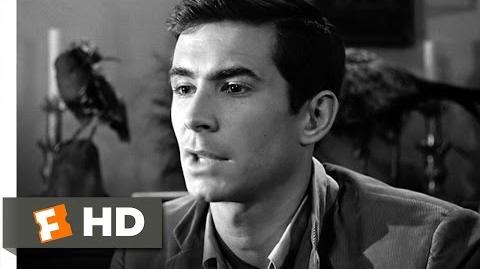 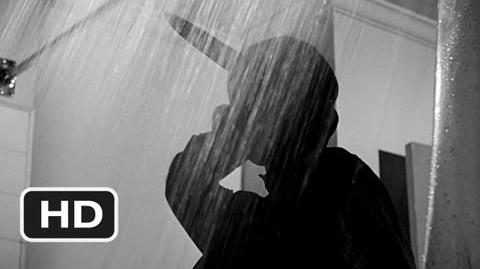 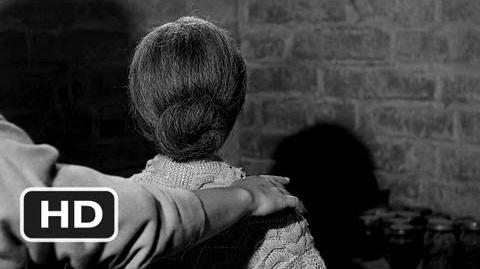 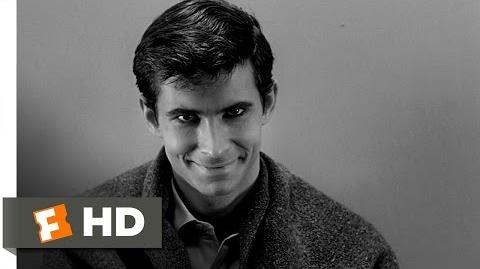