Saw is a 2004 American-Australian horror film directed by James Wan and starring Tobin Bell, Shawnee Smith, Leigh Whannell, Cary Elwes and Danny Glover. The plot of the film was conceived of by James Wan, while Whannell wrote the screenplay. It is the first installment of the Saw film series. The film's story revolves around two men who awaken kidnapped and chained in a dilapidated industrial bathroom. They are given instructions via a microcassette recorder on how to escape by following the "rules" of their "game". Meanwhile, police detectives investigate and attempt to apprehend the criminal responsible.

The film was first screened January 19, 2004, at the Sundance Film Festival to positive reviews. It was then screened at the Toronto International Film Festival on September 18, 2004, with theatrical releases on October 29, 2004, in the United States and December 2, 2004, in Australia. The film was originally rated NC-17 for strong, graphic violence, though after being slightly re-edited, it was released with an R rating.

Critical responses varied. Some critics denounced the entire film as nothing more than a "sadist gore fest" and a "low quality" and "cheap snuff film", while others praised its stylish visuals and called it a true "chilling" and "terrifying" horror film. Despite mixed reviews, Saw was a financial box office success.

Jigsaw Killer,whose name is a misnomer; he never directly kills anyone, instead putting victims in situations or mechanical traps (which he refers to as "games") in which they must go through physical and/or psychological torture to survive and escape with a better appreciation for life. Flashbacks show that while Lawrence was talking with some students and an orderly named Zep Hindle (Michael Emerson) about the terminal brain cancer of a man named John Kramer (Tobin Bell), he was approached by Detectives David Tapp (Danny Glover) and Steven Sing (Ken Leung) about his penlight being found at the scene of a Jigsaw "game". He viewed the testimony of Amanda Young (Shawnee Smith), a heroin addict, who is the only known survivor of Jigsaw's games; she barely escaped from having her jaws ripped open during her game by a "reverse bear trap" and believes that her experience made her a better person. Other victims of Jigsaw's games included Paul, who was trapped in a cage filled with barbed wire, and Mark, who was trapped in a room with a flammable substance all over his body along with a candle to help him read the walls covered with numbers that hid the combination to a safe. One of the detectives revealed that Jigsaw frequently watched his victims die - he "liked to book himself front row seats to his own sick little games."

Meanwhile, Lawrence's wife and daughter, Alison (Monica Potter) and Diana (Makenzie Vega), are being held captive in their home by a man who is watching Adam and Lawrence through a camera behind the bathroom's mirror, while tormenting Alison and Diana. Their house is simultaneously being watched by Tapp, who was discharged from the force. Flashbacks show that he became obsessed with the Jigsaw case after viewing Amanda's testimony, and that he and Sing illegally entered a warehouse they knew to be Jigsaw's lair and saved a man from being killed by drills aimed at his neck. Jigsaw managed to make a run for it after slashing Tapp's throat, and Sing was killed by a shotgun booby trap while pursuing him. After being discharged, Tapp began stalking Lawrence.

In the bathroom, Lawrence finds a mobile phone that can only receive calls and a cigarette and lighter; he and Adam use the latter two items to try to stage Adam's death, but an electric shock through Adam's ankle chain foils this plan. Following these events, Adam and Lawrence recall their abductions; they were both ambushed and knocked unconscious by a stranger wearing a gruesome pig mask. Lawrence receives a call from Alison, who warns him that Adam knows more than he is telling. Adam explains that he was paid to take pictures of Lawrence for the past few days by Tapp, and shows Lawrence a pile of pictures of him from the bag containing the hacksaws. Lawrence berates Adam for invading his privacy, while Adam shows Lawrence evidence that he was cheating on Alison. Adam then notices a picture of a man in Lawrence's house; Lawrence identifies the man as Zep the orderly, and the two deduce that Zep is their abductor. Adam then points out that it is six o'clock, the deadline. Zep moves to kill Alison, but she frees herself and manages to overpower Zep, gaining Tapp's attention in the process. He arrives in time to save

Alison and Diana from Zep, allowing them to escape, and chases Zep to the sewers.

Lawrence, who is only aware of gunshots and screaming, is zapped by the ankle chain as well and loses reach of the phone; in desperation, he saws off his foot and shoots Adam with the revolver, who collapses to the floor. Zep, who shot Tapp during the chase, enters the bathroom intent on killing Lawrence, only to be blindsided by Adam (whose gunshot wound in the shoulder had not been fatal) and beaten to death with a toilet tank cover. As Lawrence crawls away with the promise that he'll return with help, Adam searches Zep's body for a key and finds another microcassette recorder. He learns that Zep was another victim of the game, following rules to obtain an antidote for the slow poison within his body. While listening to the tape, the body that had been lying on the floor then rises to its feet and reveals itself as John Kramer, the real Jigsaw Killer. He tells Adam that the chain's key is in the bathtub, which was drained when Adam accidentally kicked the plug out. Adam then grabs Zep's pistol and tries to shoot Jigsaw but is electrocuted by his hidden remote control before he can get a shot off. Jigsaw then turns off the lights and says "Game Over" before closing the bathroom door and leaving Adam inside to die.

Roger Ebert gave Saw two stars out of four, calling it "an efficiently made thriller" but "finally not quite worth the ordeal it puts us through." Carla Meyer of The San Francisco Chronicle wrote that the film "[combined] B-movie acting with a twisted mind-set and visual tricks designed to camouflage cheap effects" and that it was "terrifying at some moments and insinuatingly creepy at many others". Despite the mixed critical response, the movie has attracted a strong following and have spawned six lucrative sequels to date.

On Empire magazine's list of the 500 greatest films of all time, it is ranked 499th. Bloody Disgusting ranked the film tenth in their list of the 'Top 20 Horror Films of the Decade', with the article saying "Perhaps the most influential horror film of the decade, Saw kick-started a franchise that became the highest-grossing in horror history... in light of its measly $1.2 million price tag the film’s quality relative to bigger-budget horror films is striking. It also takes itself seriously, which came as a breath of fresh air following the trend of wimpy tongue-in-cheek horror that had dominated the multiplexes post-Scream. More than anything, this twisted morality tale is a film made by horror fans, for horror fans; it’s gory, it’s depraved, and best of all it introduced a new horror icon in Jigsaw."

Megadeth's song "Die Dead Enough" was originally set to be featured in the movie, but was not used for undisclosed reasons.

The uncut edition of the film is approximately eight seconds longer than the theatrical version. The additional footage includes:

However, in addition to the new footage, the dialogue between Lawrence and Adam in the end, just before Lawrence leaves, has been shortened in the Region 1 release as Dr. Gordon's line of "I wouldn't lie to you." has been cut, but is retained in the Region 2 release. The short film used to promote it, also entitled Saw, is also included on the DVD.

The uncut DVD also contains "See Saw in 60", which consists of three jumpy and humorous one-minute condensed versions of the film. Two are presented using dolls with crude faces drawn on them; sound clips from the movie are used for one, high-pitched squeaky voices for the other. The third is made using actual footage from the movie and the squeaky voices. A similar Easter egg was used on later uncut releases of the sequels.

A video game, also titled Saw, was developed by Zombie Studios and published by Konami. The game serves as a sequel to Saw, and a prequel to Saw II. It was released on October 6, 2009 on the PlayStation 3, Xbox 360, and PC platforms. 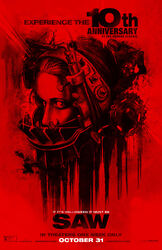 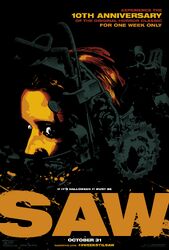 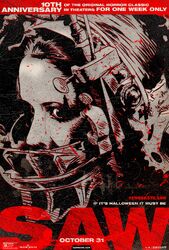 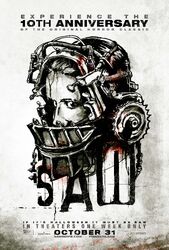 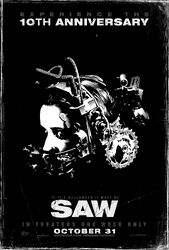