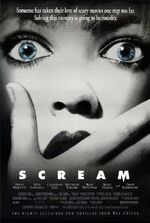 The Scream films are a series of American slasher films that follow the attempts of several individuals to murder Sidney Prescott, Gale Weathers, and Dewey Riley. The killers all don the persona of Ghostface, using a costume and voice changer to hide their own identities.

This article is a stub. You can help Horror Film Wiki by expanding it.
Insert Series Overview Here