Scream 2 is a 1997 slasher film and is the second film in the Scream series. The film is directed by Wes Craven and stars David Arquette as Dwight "Dewey" Riley, Neve Campbell as Sidney Prescott, and Courtney Cox as Gale Weathers.

The film is followed by Scream 3.

The plot is centered on a group of college friends, an ex-cop and a news reporter as they deal with some mysterious killings that take place after the release of the horror movie Stab, which was inspired by the events in the California town of Woodsboro depicted in the original film. Many of the survivors from the first movie return to reprise their original roles in this film.

Sidney and Randy are attending Windsor College. They see on the news, that a couple (Maureen Evans and Phil Stevens) were murdered in a movie theater at the preview of the Stab movie based on a book by Gale Weathers about the Woodsboro murders. Soon they realize, it's starting all over again, because they were both from the same college like them. Gale, famous because of the events in the first movie arrives to investigate the new killings.

Dewey also arrives on the campus to try and help protect Sidney, who he sees as a surrogate sister after the murder of his sister in the first killing spree. Once again, in the "rules" scene, Randy and Dewey talk to each other and explain to each other, that anyone could be the killer (known as Ghostface), including themselves. During the course of the discussion, Randy continues his job of explaining the rules of a horror movie, this time the "rules of a sequel".

The killer attempts to kill Sidney, while setting up a copycat ploy. Casey "Cici" Cooper, a sorority girl, is the next victim. While alone at her sorority house, Cici is threatened by the killer over the phone before the killer attacks her inside the house and chases her upstairs. The killer then stabs her in the back twice before throwing her over a third story balcony.

Randy is the next victim, when the killer calls and Gale and Dewey search for where the call is coming from, when the killer says, he can see them. It happens, when Randy looks around and is outside of Joel's (the cameraman) van, when he is unexpectedly pulled into the van in broad daylight and stabbed to death after insulting the dead Billy Loomis, one of the first films killers. Officer Andrews and Officer Richards, the detectives who were assigned to protect Sidney, are also killed. Gale and Dewey are caught up in a game of cat and mouse with the killer, resulting in Dewey being stabbed. After being trapped in a cop car, that has crashed and narrowly escaping a "tight" squeeze, Sidney's roommate is killed, while trying to run away and Sidney heads for the campus theater.

While in the school theater, Sidney witnesses the death of her boyfriend Derek at the hands of Mickey. In the final confrontation, the killers are revealed to be Sidney's new boyfriend's best friend, Mickey, and the mother of Sidney's previous boyfriend, Billy, who posed as Debbie Salt to be near the crime scenes. Mrs. Loomis shoots Mickey, removing her accomplice and a potential threat, stating that his motive was completely absurd and that no one would believe it. (Mickey wanted to blame it on horror movies; the "effects of cinema violence in society in the hopes of having a famous trial.") Mrs. Loomis didn't want such a trial. She wanted to kill Sidney as a revenge of killing her son, yet Sidney pointed out to her, that if she hadn't abandon Billy in the first place he wouldn't have gone on his killing spree with his partner, the second killer in the first film.

Before he collapses, Mickey accidentally shoots Gale, as she is running towards him, causing her to fall off the stage. Sidney is cornered by Mrs. Loomis and tricks her by saying, "Isn't Mickey supposed to be dead?", and when Mrs. Loomis looks, Sidney hits Mrs. Loomis in the face with a prop jar. Sidney then causes the stage to collapse on Mrs. Loomis. Mrs. Loomis survives and gets Sidney in an arm lock, and Cotton, the man framed who was framed for killing Sidney's mother Mrs. Prescott, shows up, and picks up Mickey's gun.

Mrs. Loomis tries to convince Cotton to kill Sidney, but Cotton shoots Mrs. Loomis instead. Gale is alive, as the bullet had bounced off one of her ribs. Then Mickey suddenly jumps up and Gale and Sidney shoot him multiple times. Then, Sidney turns around and shoots Mrs. Loomis in the head, "Just in case".

It is then revealed that Dewey was alive after, quite literally, being stabbed in the back (while a horrified Gale watched while in a sound studio, unable to hear him cry for help because of soundproof glass). Gale is overjoyed, that he was found alive and the movie ends with Sidney making amends with Cotton, looking up into the sky and walking away from the scene of the carnage.

The following is a list of notable deaths in Scream 2. The characters who are considered good are written in green, while the "bad" characters are red. If the character is neither good nor bad, the name is written in white.

Scream 2 received mostly positive critical response following its release with some critics even arguing that the film surpassed the original in both scares and humor. There was, however, criticism over the death of the character Randy Meeks played by Jamie Kennedy, who had appeared in the first movie and survived it.

It received three Saturn Awards and one MTV Movie Award.

The Scream 2 original soundtrack was released November 18, 1997 by Capitol Records. The soundtrack consists of 15 songs from the R&B, Rap and Rock genre, recorded between 1970-1997. The album spent ten weeks on the Billboard 200, but gained most negative reviews from critics. 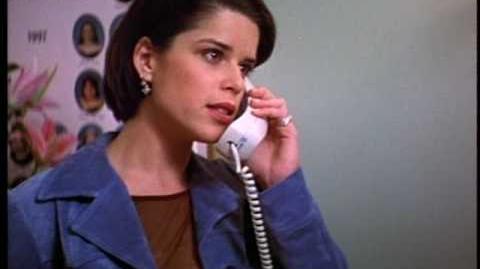