Scream 3 is a 2000 slasher film directed by Wes Craven, and is the third installment of the Scream series. The film stars Neve Campbell, David Arquette and Courteney Cox Arquette, each reprising their roles from the first two films.

The film was originally supposed to be the last film of the Scream trilogy, however, 11 years later it was followed by Scream 4.

While Sidney and her friends visit the Hollywood set of Stab 3, the third film based on the Woodsboro murders, another Ghostface killer rises to terrorize them.

Having experienced the trauma of the killings at Woodsboro and Windsor College, Sidney Prescott character now lives in a secluded area of California, where she works as a women's crisis counselor from her home. Her home has a security gate around it and she is now practically an agoraphobic, only leaving her house to walk her pet Golden Retriever. Her whereabouts are unknown even to her surviving friends (save for Dewey and her father.). Gale Weathers has become a largely successful news reporter, thanks to the books she wrote revolving around the murders of the first two films and subsequent films based on the books.

The film begins, when Cotton Weary, the man wrongly convicted of killing Sidney's mother prior the first film and now a happy and wealthy man after having saved Sidney in the second movie, is murdered and slaughtered along with his girlfriend, Christine, for refusing to give up information about Sidney's whereabouts. Suspected of being related to the original killings, Los Angeles police detectives led by Mark Kincaid informs Gale Weathers of Weary's murder, asking if she may know anything about a picture found at the murder scene. When she identifies it as a picture of Maureen Prescott, Sidney's mother, it becomes apparent the killings are linked to her murder. Sidney is later molested by Ghostface, who has found her anyway, which forces her to come out of hiding, while Dewey has become aware of the situation, too.

Randy also appears in a video recorder message from the past passed to them by his sister Martha, in case he wouldn't survive the second killing spree (he didn't). He warns them, the rules in case of a third killing spree change, should some background appear, that was unknown until then and therefore everything is now possible, including the fact, that nothing is what it seems, even regarding the past and that they could all die, too. Sidney, Gale and Dewey become then fully involved in investigating. The cast and crew of the latest 'Stab' movie are being killed off one by one, the actors in the order, in which they die in the script. Sidney and her friends are also attacked. Even Roman, the movie director, is found stuffed in a trunk.

It turns out, that Roman (who had faked his own murder) is the killer known as Ghostface, the connection being, he is Maureen's illegitimate son and Sidney's half-brother.

It is further revealed that Roman is a product of rape, which occurred during Maureen's brief stint as a B-list movie actress in early 1970's under the name Rena Reynolds in Hollywood at the place, where Roman reveals himself to Sidney.

He searched for her his whole life, but was rejected by her, when he found her, which awoke his wish to kill her for that. Roman also tells Sidney, that her mother left her father and cheated on him with Hank Loomis, causing Mrs. Loomis to leave her husband. He found that out by spying on her. Later Roman told Billy Loomis, why his mother had left his father showing him proof of that and convinced him to kill Maureen. Roman also told Billy to have an accomplice, who was weak and easily willing to help him out,

Roman's influence on the events in the second film is never explained, but he had become jealous for the protagonist Sidney received because of the killing sprees and decided to do the third one and frame Sidney for that. Eventually Sidney confronts Roman, which turns into a fight and Roman shooting her, Roman then gets distracted and Sidney hides behind a bar, calls up Roman's cellphone, revealing where he is in the room, then stabbing him in the back with an ice pick. Sidney reveals to Roman, that she too wears a bulletproof west. Dewey and Gale comes to the rescue as Roman "dies", seconds later come to life, shouting; "You can't fucking kill me". Dewey fires several shots into Roman, not doing any use because of the bulletproof west, Sidney yells: "Head. Head, Dewey. Shoot him in the head". Dewey does and Roman falls to the ground with a hole in his head.

We later see Sidney at her home, happy again. On the porch Dewey proposes to Gale, which she answer with a yes. Inside the house, Dewey, Gale and Kincaid wait for Sidney, saying they are going to watch a movie. Sidney then leaves the house alarm off and going to join the others, when the door opens by itself. Sidney turns around and gives a small smile.

The following is a list of notable deaths in Scream3. The characters who are considered good are written in green, while the "bad" characters are red. If the character is neither good nor bad, the name is written in white. 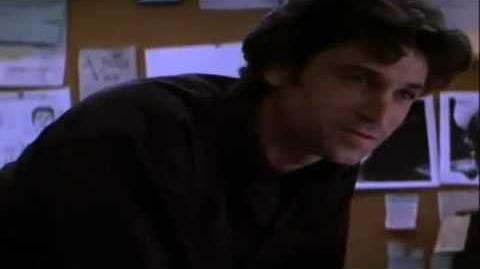 Retrieved from "https://horror.fandom.com/wiki/Scream_3_(2000)?oldid=140181"
Community content is available under CC-BY-SA unless otherwise noted.