In 2012 the film was followed by a sequel, Silent Hill: Revelation.

The film followed a mother who took her troubled adopted daughter to Silent Hill which was the town that the girl cried out for while sleepwalking. After being knocked unconscious in a car crash outside the town, she awoke to find her daughter missing and the town engulfed in an alternate reality of fog and falling ash. While searching for her daughter, she faced surreal reality shifts and monstrous creatures while uncovering her daughter's connections to the town's dark secrets.

Rose Da Silva and her husband, Christopher Da Silva are concerned about their adopted daughter, Sharon who was experiencing severe nightmares and began sleepwalking. Their only clue to the girl's condition was her repetition of the name "Silent Hill."

Desperate for answers, Rose took Sharon to the town of Silent Hill, despite Christopher's opposition. She reached the town, but was knocked unconscious in a car crash and awoke to find out that Sharon was missing.

Rose searched the empty streets of the town for her missing child. Instead, she encountered a series of monstrous creatures and a ragged woman named Dahlia Gillespie who spoke about the terrible things that are done to her own daughter, Alessa by the townspeople. Dahlia claimed that Sharon was actually her own daughter, not Rose's.

After running from Dahlia, Rose eventually encountered a police officer, Cybil Bennett who initially attempted to arrest her. Upon discovering that the road out of the town mysteriously disappeared. However, Cybil allowed her to go free and the two worked side-by-side to survive in the hellish town.

Scenes of their search are interspersed with scenes of Christopher's search of the town with the reluctant assistance of Officer Thomas Gucci. Christopher discovered the documents showing that the town was abandoned after a terrible fire 30 years ago along with a photo of Dahlia's daughter who bore a remarkable resemblance to Sharon. Christopher was arrested by Officer Gucci when he tried to question the orphanage about Sharon and Alessa and was told to stop investigating Silent Hill.

Meanwhile, Rose and Cybil found refuge from Silent Hill's monsters in the church, led there by a woman named Anna where they discovered the remaining townspeople which was a religious cult, headed by Christabella. After convincing Christabella that she wanted to find the 'demon' that was feared by the townspeople, Rose was taken to a hospital in the town along with Cybil. Here, Christabella discovered the likeness between Sharon and Alessa and condemned Rose and Cybil as witches. Cybil was captured as she defended Rose who escaped the clutches of the cult and descended into the basement of the hospital. Rose eventually encountered a badly burned figure - Alessa - in a hospital bed and a mysterious little girl (Dark Alessa, the manifestation of the dark side of Alessa's soul) who strongly resembled the missing Sharon. In an extended flashback, Rose discovered that Silent Hill had a history of ritual witch burnings and an attempt to burn Alessa 30 years ago went disastrously awry, resulting in the devastating fire destroying the town. Rose was told that Sharon was a manifestation of Alessa's remaining innocence and goodness and was taken to the orphanage and subsequently adopted by Rose and Christopher. Rose agreed to help Alessa gain her final revenge.

Rose entered the church soon after Cybil was burned to death by the townspeople and Sharon was about to suffer from a similar fate. She confronted the townspeople and Christabella with what she knew, attempting to convince the cult that they are in denial of their own fate. Christabella stabbed Rose causing Rose's blood to drip onto the church floor, opening a portal into Alessa's dark world. The burned Alessa and Dark Alessa rose out of the pit and proceeded to kill Christabella and the townspeople with huge tangles of barbed wire, leaving Dahlia the sole inhabitant of Silent Hill. Rose and Sharon (who now bonded with Dark Alessa to create a new "reborn" Alessa) left Silent Hill and returned home. Nevertheless, although Rose and Sharon/Alessa are in the same room as Christopher, they could not see each other.

The development of the film Silent Hill began in the early 2000s. For five years Christophe Gans attempted to gain the film rights to Silent Hill. When they bore no fruit, Gans sent a video interview to Konami explaining his plans for adapting Silent Hill and how important the games are to him. As a result, Konami awarded him the film rights. After obtaining them, Christophe Gans and Roger Avary began working on the script in 2004 and, for that, Avary used Centralia, Pennsylvania, as an inspiration for the town.

Filming began in February 2005 with an estimated $50 million budget and was shot on sound sets and on location in Canada (Brantford, Ontario and Hamilton, Ontario). 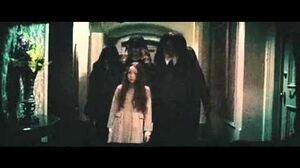 Retrieved from "https://horror.fandom.com/wiki/Silent_Hill_(2006)?oldid=128280"
Community content is available under CC-BY-SA unless otherwise noted.