Sorority Row is a 2009 slasher film and a reimagining of the 1983 film, The House on Sorority Row.

A group of sorority sisters try to cover up the death of their house-sister after a prank gone wrong, only to be stalked by a serial killer.

When Megan finds out that her boyfriend Garrett cheated on her, she and her sorority sisters, Cassidy, Ellie, Jessica, Claire, and Charlene, decide to play a prank on him. They decide to fake Megan's death and dispose of her body to scare him. However, when they are disposing of the "body" at an abandoned steel mill, Garrett loses control and stabs her body with a tire iron, resulting in her real death. Garrett and the girls decide to cover up the incident and throw Megan's body down a mineshaft.

Eight months later, while at a graduation party, everyone involved recieves a text message with a picture of a robed hand holding the bloody tire iron.

Suspicions quickly fall fall on Garrett, but Charlene is quick to defend him, claiming he is mentally incompetent after what happened. Jessica still insists it's him pulling a sick joke, but moves on with the party. Megan's sister Maggie later arrives to honor her dead sister's memory.

Later, Charlene leaves to go to her therapist appointment. Not knowing that her therapist was killed earlier, she thinks he is playing a sexual game. She lies down and drinks champagne when she is suddenly murdered by a mysterious killer wearing a hooded black robe holding the spiked tire iron.

Later, in the sorority's shower room, Claire and Jessica talk about the incident. After they leave, a sorority girl named Joanna, who overheard their conversation, gets murdered by the mysterious killer with the same tire iron.

That night, a large graduation party is thrown. Claire's boyfriend, Mickey, is attacked and murdered by the hooded killer, with Ellie witnessing the whole thing.

Cassidy, Claire, Jessica and Ellie regroup and all receive a text containing the video of Megan's death and a message telling them to go to the steel mine in 20 minutes or the video will be sent to the police. The girls drive to the mine shaft, and encounter Garrett, who has cut his wrists. Thinking Garrett is the one stalking them, Jessica runs over him with her vehicle. However, they discover afterwards that Garrett has been receiving the same text messages they have. Ellie suspects that Megan is the killer, believing that she did not actually die and is seeking revenge. To prove that Megan is dead, the girls lower Cassidy down the shaft to look for her remains. When she reaches the bottom, she finds finds a message written in blood that says "Theta Pi must die."

Back at the now empty sorority house, the girls receive a text from Charlene's cell phone, telling them that she is dead. Afterwards, Claire is killed. Searching the house for Jessica's boyfriend, Kyle, the girls bump into Maggie and their house mother, Mrs. Crenshaw. After finding out about the incident, Mrs. Crenshaw tells the girls to lock themselves in a bedroom and to call the police while she searches for the killer, who is in the house. Maggie is shocked and leaves the room to find the killer, who she believes to be Megan. After a game of cat and mouse in the kitchen, Mrs. Crenshaw is killed. The girls hear the shots from Mrs Crenshaw's gun and believe that she killed Megan. With no cell phones around, Cassidy and Jessica decide to find Mickey's body and use his cell, telling Ellie to run if she gets the chance. Downstairs, the killer confronts Maggie and throws a Molotov cocktail at her, setting the house on fire.

Cassidy and Jessica find Mickey's body but run into Kyle, who injures Jessica after getting into a fight with her. Cassidy and Jessica flee to an under-renovation bathroom where they find Megan's decomposing corpse hanging in the shower. Kyle attacks them there and knocks out Jessica. Before he can harm Cassidy, Kyle is killed with an axe by Andy, Cassidy's boyfriend, who reveals himself to be the killer. Andy claims he tried to protect them by keeping his scheme to himself. Andy wanted to have a perfect future with Cassidy, but she was always at risk of being found out. So Andy decided to kill everyone who knew of Megan's murder. Andy then kills Jessica and tells Cassidy that they need to kill Ellie too.

Cassidy is opposed to this, but Andy says that the geekish Ellie is the weakest and reveals that Ellie was the one who confided in him all about Megan's death, so she will be likely to tell someone else. Devising a plan, Cassidy plays along and tells Andy that Ellie is in the basement, and while Andy goes to look for her, Cassidy fetches Ellie from upstairs and they try to run out the front door. They are ambushed by Andy, who is hurt that Cassidy would betray him. Urging Ellie to flee, Cassidy hits Andy with a lamp and tries to escape, but stops as she hears Maggie's cries for help from the burning section of the house. Cassidy tries to help her out but Andy comes and tries to stop her, forcing Cassidy to hurt him. The floor then crumbles underneath Cassidy, and she is left hanging over the burning basement. As Andy is about to finish her off, Ellie appears and shoots him with Mrs. Crenshaw's shotgun. He falls backwards onto the burning floor, which collapses under him and he falls to his death in the flames. With Andy dead, Ellie tells Maggie to wrap a curtain around herself and run through the flames, the two then pull Cassidy back up from the hole in the floor. The three survivors, Cassidy, Ellie, and Maggie escape from the burning sorority house, just as the fire department and other emergency personnel arrive.

15 months later, Theta Pi is being renovated from the fire and Maggie is now a Theta sister. As the girls sing the Theta Pi song, a man comes into view, holding a garden trowel. The camera pans up to his wrist, revealing fire burn scars.

Sorority Row entered pre-production in January of 2008. Principal photography for the movie began on October 16, 2008 in the Pittsburgh area. Filming was finished by March 26, 2009 and all the editing was completed by May 2, 2009.

The film recieved generally negative reviews. Rotten Tomatoes reported that only 22% of critics gave the film a positive review out of a sample of 68. 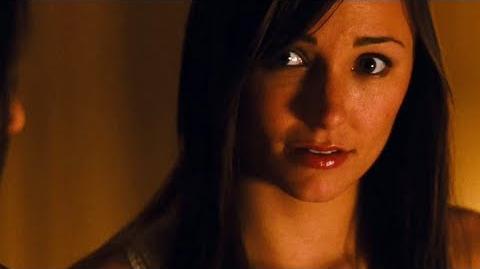 Retrieved from "https://horror.fandom.com/wiki/Sorority_Row_(2009)?oldid=129094"
Community content is available under CC-BY-SA unless otherwise noted.