This page needs improvement. It can be improved by: plot, pictures, list of deaths, quote on top, external links

The Amityville Curse is the fifth installment to the Amityville Horror saga and was directed by Tom Berry, it stars Kim Coates, Cassandra Gava and Jan Rubes.

Marvin and Debbie buy the house. They renovate with the help of three friends: Frank, Bill and Abigail. The former housekeeper, Mrs Moriarty, is murdered. A priest had been murdered at the house twelve years earlier when the house was a rectory. At the end, Frank is possessed by the curse, causing him to murder Mrs. Moriarty (by pushing her from the top of a flight of stairs), Marvin and Bill. He tried to kill Debbie but he failed, and eventually, with the help of Abigail, Debbie kills Frank, and the two women are saved.

The film was loosely based around Hans Holzer's book The Amityville Curse. The movie is unusual for featuring a completely different haunted house and a different back-story than the rest of the series.

Even though the setting of the film is supposed to be in Amityville, it is not actually 112 Ocean Avenue, the setting for the previous Amityville films. The house used here is a different house. This film has a plot line and back-story completely unique to this film and is in no way connected to the previous films. A brief reference is made to the DeFeo murders and to the town's supernatural history.

It was made in 1989 and released to video in May 1990. This is the only movie in the series that has not been released on DVD in the US. 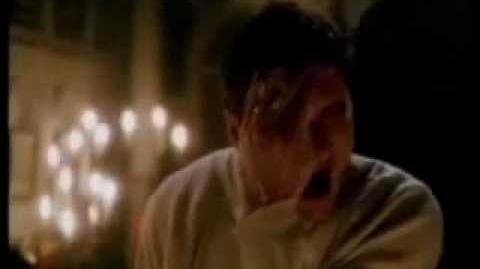