This page needs improvement. It can be improved by: plot, pictures, list of deaths, information, quote on top, trivia

The Amityville Haunting is a direct to video film released in December 2011. It is the tenth production to be inspired by the 1977 book The Amityville Horror. The film was produced by The Asylum and Taut Productions.

The film was directed by Geoff Meed, and stars Tyler Shamy, Devin Clark and Jon Kondelik. The tagline is "The family did not survive. But the recordings did. It claims to be based on actual found footage that documents the horrifying experiences of a family that moved into the infamous haunted house."

Although the poster features the traditional quarter round windows and gambrel roof of 112 Ocean Avenue, they are never seen on screen.

In June 2008, the Benson family moves into 112 Ocean Avenue, Amityvillle, where Ronald DeFeo, Jr. shot and killed six members of his family in 1974. Tyler Benson, a teenage boy, uses his camcorder to record the experiences of himself, his two sisters and parents at the house, and some of the story is also told through CCTV camera footage, after cameras are installed in the house. Various unexplained events occur, culminating in the deaths of all of the members of the Benson family. 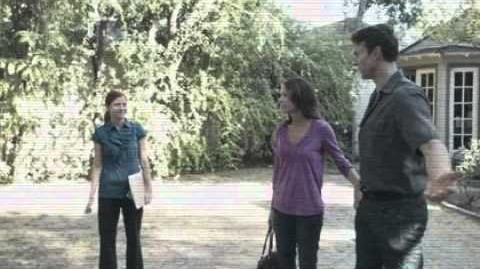 Retrieved from "https://horror.fandom.com/wiki/The_Amityville_Haunting_(2011)?oldid=123439"
Community content is available under CC-BY-SA unless otherwise noted.