This page needs improvement. It can be improved by: plot, pictures, list of deaths, quote on top

The story is based on the alleged real life experiences of the Lutz family who buy a new home on 112 Ocean Avenue, in Amityville, New York, a house where a mass murder had been committed the year before. After the family move into the house, they experience a series of frightening paranormal events.

Warning: this text contains details about the plot/ending of the film.
A couple proceeds with the purchase, and moves in. George appears not to be strong of faith, but Kathy is at least a nominal Catholic. The couple turns to Father Delaney to bless the home. Father Delaney encounters troubles in trying to bless the home, including a room full of flies, out of season, violent stomach sickness, and later, blisters on his palm when trying to make even a phone contact with Kathy at the home.

In his further efforts to confront the evil, he suffers a car wreck from brake and steering malfunction, a lack of support by his superiors in the diocese as he describes the occult things he's seen, and ultimately, blindness and a mental breakdown.

George begins to be more sullen and angry over perceived cold in the house, and obsesses with splitting logs and keeping the fireplace stoked. One of the two boys suffers a crushed hand when a sash window falls on it, and the little girl has an imaginary friend, Jody, who seems to be of a malevolent nature. Mom, Kathy, catches a glimpse of two red, swine-like eyes, outside the daughter's 2nd story window. The family dog, Harry, a black Labrador, obsesses over a secret room in the basement.

George's land surveying business begins to suffer with his lack of attendance, and his partner is concerned. The business partner's wife, very sensitive to the paranormal, is at once both repulsed and intrigued by the things she feels when at the house. "Boy are these vibes ever strong!" she says at one point.

The Lutzes witness a black, bubbling substance coming up in the toilets, an "ooze" coming down from nail holes in the walls, a babysitter being trapped in a closet despite its not having a locking doorknob, the disappearance of $1,500.00 cash, and Kathy's aunt, a nun, running from the house and vomiting. Kathy observes George's persistant waking at 3:15 am, feeling he must go check on the boathouse, and other unsettling incidents. Kathy has nightmares in which she is given details about the killings of the home's prior family.

Their research at the library and at the county records office suggest that the house is built atop a tribal burial ground, and that a known devil worshiper named Ketcham had once lived on the land.

Finally, the paranormal events drive the family to flee the house one night, in the pouring rain, no longer even worried about their possessions. The final titles read that, "Today the Lutzes live in another state."

The on-location scenes of The Amityville Horror were filmed at a house in Toms River, New Jersey, which had been converted to look like the 112 Ocean Avenue home after the authorities in Amityville denied permission for filming on the actual location. Exterior scenes were also filmed in Toms River and Point Pleasant Beach. Local police and ambulance workers would play extras in the film, while the Toms River Volunteer Fire Company was used to provide the rain during several scenes. Jay Anson's screenplay, based upon his bestselling novel, was rejected by the producers, who opted for a version written by Sandor Stern. Indoor shots were filmed in MGM studios in California.

James Brolin was hesitant when first offered the role of George Lutz. Told that there was no script, he obtained a copy of Anson's novel to read. Brolin started the book and read until two o'clock in the morning. He had hung up a pair of his pants in the room earlier and during an especially tense passage of the book, the pants fell to the floor. Brolin jumped from his chair in fright. It was then that Brolin decided to do the movie. Brolin became friendly with George Lutz and his family, though he was highly doubtful of their story. Brolin later said he could not get a job for two years because of his performance in this film, despite starring in both 1980's Night of the Juggler and 1981's High Risk.

The Amityville Horror was one of the most successful films produced by an independent studio at that time. It was a huge box office success, earning more than $86 million in the USA. However, the film received poor reviews from critics such as Leonard Maltin and Roger Ebert, the latter describing it as "dreary and terminally depressing".

Lalo Schifrin's musical score was nominated for an Academy Award, but lost out to the score for A Little Romance by Georges Delerue. It is sometimes claimed that this score was the one rejected in 1973 for The Exorcist, but Schifrin has denied this in interviews. [2] Margot Kidder received a Saturn Award nomination for Best Actress for her performance. 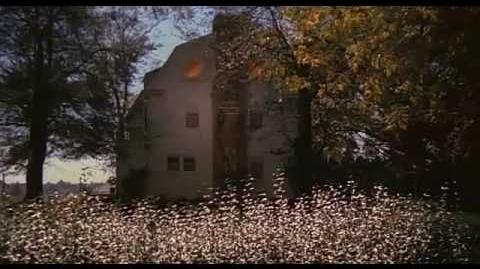 Retrieved from "https://horror.fandom.com/wiki/The_Amityville_Horror_(1979)?oldid=143999"
Community content is available under CC-BY-SA unless otherwise noted.