This page needs improvement. It can be improved by: plot, list of deaths, quote on top, trivia, external links, videos

The Apparition is a paranormal horror film directed and written by Todd Lincoln. It is rated PG-13 and was on August 24th, 2012.

When frightening events start to occur in their home, young couple Kelly and Ben discover they are being haunted by a presence that was accidentally conjured during a university parapsychology experiment. The horrifying apparition feeds on their fear and torments them no matter where they try to run. Their last hope is an expert in the supernatural, Patrick, but even with his help they may already be too late to save themselves from this terrifying force and death.

The film is being produced by Warner Bros. and Dark Castle Entertainment. On May 9, 2009, Todd Lincoln was named as the director and screenwriter of the project, and it will be his directorial debut. The film is inspired by allegedly true events about a supernatural attendance unleashed by a college experiment. Filming began on February 26, 2010 in Berlin, Germany, with other scenes being shot in Los Angeles. On March 25, Ashley Greene shot some scenes in Palmdale, California. At the 2010 South by Southwest Film Festival, Lincoln narrated the film alongside lead actress Greene. The budget of the film is estimated at $17,000,000.

Kelly & Ben
Add a photo to this gallery 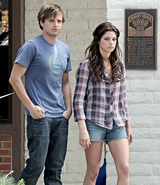 Ashley Greene
Add a photo to this gallery
Retrieved from "https://horror.fandom.com/wiki/The_Apparition_(2012)?oldid=123777"
Community content is available under CC-BY-SA unless otherwise noted.