Bingo is a animatronic gorilla wearing white glasses, a yellow vest, and reddish-orange chucks. He has small dead-looking eyes, black hair, and a toothy grin. Despite not being the leader of the Splits, he is sometimes considered the primary antagonist of the film out of all the others. He gets killed by Snorky protecting Harley.

Fleegle is a animatronic dog wearing a large red bow tie and two black buttons. He has black circles around his eyes, a white snout, hairless feet, and his tongue is always sticking out, giving him a lisp. He is the leader of the Banana Splits, and parts of his costume get torn off throughout the film, revealing the terminator-like endoskeleton underneath.

Drooper is a animatronic lion wearing yellowish-orange glasses, and white spats on his feet. He has dark brown hair, and the tip of his tail is yellow. In the cover art for the home video releases, behind the scenes feature, and one of the eBay images, he has sharp and rotten teeth, though they aren’t seen anywhere in the film.

Snorky is a animatronic elephant wearing pink sunglasses, and a green vest with yellow stripes. He has black beady eyes, and red polka dots on the insides of his ears. Snorky doesn’t speak, and only communicates through honking sounds. During the climax of the film, he becomes an ally when Harley convinces him to help him. He unfortunately dies while protecting Harley from Bingo. 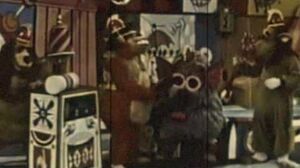 Retrieved from "https://horror.fandom.com/wiki/The_Banana_Splits_Movie_(2019)?oldid=130304"
Community content is available under CC-BY-SA unless otherwise noted.