This page needs improvement. It can be improved by: pictures, list of deaths, quote, trivia, external links

The film is a very loose adaptation of Edward Levy's 1981 novel of the same name. The screenplay was written by Tom Holland and an uncredited Danilo Bach; it was Holland's first feature film script. It was dismissed by critics upon release as being cheap and exploitative. In more recent years it has gained a cult following.

Director Mora has stated that United Artists cut several scenes from the film which clarified some of the story's plot details.[1]

While driving through Mississippi on their honeymoon, Caroline and Eli MacCleary (Bibi Besch and Ronny Cox) are stranded on a deserted road when their car is stuck in the mud. Eli is forced to walk several miles down the road to a service station they stopped at earlier to get a tow. While he is gone, Caroline is attacked and raped by a mysterious creature.

Seventeen years later, their son Michael (who was conceived as a result of Caroline's rape) has become gravely ill, and the doctors have no idea what is causing the sickness, only that a pituitary gland has gone out of control. Theorizing that the sickness might be genetic, Eli and Caroline finally confront the past and return to the small town where she was attacked to hopefully discover some information about the man who assaulted her. The local townspeople are reluctant to help, with both the newspaper editor and the town judge brushing aside their questions. But then Eli and Caroline hear a story about a local man named Lionel Curwin who was murdered 17 years earlier, his body partially eaten and his house almost burned down.

Meanwhile Michael has escaped from the hospital and returned to the same town, unbeknownst to his parents. His personality undergoes a frightening transformation, and he quickly begins to attack and kill specific people in the community, including the paper editor and the local mortician, both of whom were related to each other.

After several more revelations, including the discovery of a swamp filled with bodies whose bones show signs of having been gnawed on, Caroline and Eli finally discover the terrible truth about the creature that attacked her those many years ago. And what's worse, it appears that the creature is about to be reborn through Michael, and its murderous actions are the direct consequence of a carefully concealed secret.

This film score was the final feature-length score for composer Les Baxter, who considered it to be one of his finest. James Horner was rumored to have contributed to the film's score with elements from his music used by Baxter; this was later proven false.[2]

The film was released on DVD in the United States by MGM Home Entertainment as part of their Midnite Movie line in 2001.[5] This version is currently out of print. 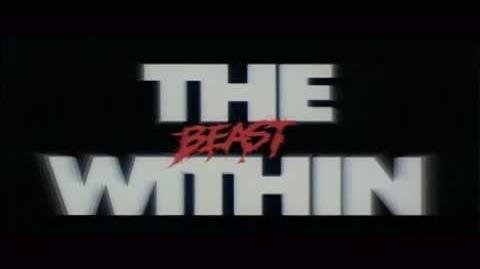 Retrieved from "https://horror.fandom.com/wiki/The_Beast_Within_(1982)?oldid=124532"
Community content is available under CC-BY-SA unless otherwise noted.