The Blair Witch Project is a 1999 American horror film written and directed by Eduardo Sanchez and Daniel Myrick. It was one of the first films to utilize the "found footage" filiming technique. Other films such as Cloverfield, Diary of the Dead, and Paranormal Activity would use this same technique.

The film is about three film students who vanish after traveling into a Maryland forest to film a documentary on the local Blair Witch legend, leaving only their footage behind.

The film follows three young filmmakers attempting to chronicle a local myth, the titular Blair Witch. It begins with a disclaimer that the students went missing and that this is the last known footage of them. The students, Heather Donahue, Micheal C. Williams, and Joshua Leonard, go to Burkittsville, Maryland where they interview some locals. These locals tell varying tales of missing children and personal accounts. Some locals tell a tale of a man named Rustin Parr who kidnapped and murdered seven children in his home in the woods.

The next day, the filmmakers explore the woods of Burkittsville more in depth. They come across two fishermen who recall a tale of a girl who went missing, who now supposedly haunts the woods. The students move on to Coffin Rock where, apparently, five men were brutally and ritualistically murdered. Later, they camp for the night. When they wake up, they begin to suspect they are lost. They find an old cemetery that has several small stone piles. One of the campers disturbs one such pile. Later in the night, mysterious sounds are heard from all around the tent.

The next day, the students attempt to return to the car, but are hopelessly lost. The ramble through the woods until sunset and set up camp. They hear the same noises as the previous night, but cannot place the source. When they awake, they find three small rock piles, similar to the ones in the graveyard. When they go out hiking for the day, Heather states having lost the map. Mike fesses up to having kicked the map into a creek in frustration. They continue on, and find ominous humanoid figures made of sticks hanging from the trees. That night at camp, they hear sounds of children and "morphing sounds". An unknown presence shakes the tent and the students run in fright. They huddle together in a field until sunrise. The filmmakers return to camp to find some equipment destroyed and a slimy mess on some of their things. Later, they cross a creek that they had previously crossed and realize that they are lost again. They set up camp again, having wasted a whole day.  When they wake the next day, Josh is missing. Upon camping that night, they hear him screaming out in the darkness. Mike mentions that it might be the mysterious entities trying to trick them. The next morning Heather finds a bundle of sticks that opens up to a piece of flannel, teeth, and hair; supposedly belonging to Josh.

Heather leaves an apologetic memorandum on the camera and that night the remaining campers hear Josh's screams. This time they decide to investigate. They come upon a decrepit home in the woods. Mike goes upstairs and Heather tries to follow. Mike hears Josh's voice downstairs instead and they go to the basement. Mike's camera documents what appears to be a struggle and Heather calls out to him. A final image of Mike standing in the corner appears and Heather seems to fall in part of a struggle as well. The footage ends in silence.

The Blair Witch Project began production in 1994. Dialogue was improvised. The directors put out an ad for actors with good improv skills. Filming began in 1997 and lasted eight days. Most of the movie was filmed in Seneca Creek State Park, some scenes were actually filmed in Burkittsville Maryland. Some of the townsfolk interviewed were not actors. Donahue had never worked with a camera before, and was given a crash course in two days. Teeth were donated by a dentist for a prop. Production budgets range from as low as $20,000 to $750,000.

The movie was widely acclaimed by critics. Rotten Tomatoes gave the film an 87%, where as its audience gave it a 55%. It also holds a score of 81/100 on Metacritic. Its groundbreaking "found footage" feature helped it garner a warmer review from all critics.

The film's internet campaign was one of the first of its kind. The movie's official website had fake police reports and newsreel-style like interviews. Hence, some people thought there were actually missing teenagers, causing more internet arguments and attention.

Due to the cameraman's inexperience with camera work, many shots are shaky and nauseating. Some moviegoers reported motion sickness and even vomiting as a result. 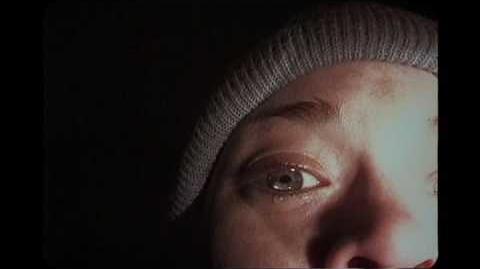 Retrieved from "https://horror.fandom.com/wiki/The_Blair_Witch_Project_(1999)?oldid=127844"
Community content is available under CC-BY-SA unless otherwise noted.