This page needs improvement. It can be improved by: pictures, list of deaths, quote, trivia

The Breed is a 2006 horror film directed by Nicholas Mastandrea. This marked Mastandrea's directorial debut. It was released in May at the Cannes film festival and subsequently released in other film markets and festivals around the world.

The films begins with a couple on a small sailboat who find a small island and begin to look around. The girl sneakily wanders off while the boy ties up the boat. She stumbles across a fence and a small compound, but no one seems to be around. She is then attacked by unknown creatures. The boyat the boat is startled by her screams.

Cut to a seaplane heading to what appears to be the same island. Justin and Sean are two brothers who are heading to the island for a week of fun and relaxation. The island was owned by their uncle, who built a cabin on it. He recently died, and the island is otherwise uninhabited. The brothers are joined by four friends, Hannah, Joel, Kaylen, and Bhuvan. They fly in on a seaplane, which they moor at a dock near the cabin.

Soon after they arrive, a puppy shows up. The friends take him in to the cabin. Bhuvan goes into the kitchen to get a drink. The puppy follows him in. The puppy then mysteriously growls at him and runs off. Kaylen and Sean then follow him out. They are ambushed by an older vicious dog and Kaylen is bitten by it. The pair manage to get back to the cabin.

The following morning, the boys are in the forest. They bump into the boy who came to the island at the beginning of the movie. He is bloody and warns them about the dogs. A pack of dogs attack and eat him. The boys run back to the cabin and tell the girls to come inside. A dog attacks Hannah and Sean shoots an arrow, wanting to kill a dog, but accidentally impales one through of Hannah's leg instead. They are soon under siege by more vicious dogs.

The friends decide they must leave the island, but dogs have surrounded the plane. As they have no other way off the island, and no means of communication, they will have to wait out the dogs. A few minutes later, however, they see the plane has detached from its moorings and is drifting toward the ocean. The dogs have chewed through the ropes to force the friends out of the cabin, and when Sean attempts to swim to the plane the dogs are on the plane and then the dogs attack him. but he manages to swim to the dock then the friends retreat to the house. Kaylen begins to show distinct canine behavior, such as a ravenous appetite and growling.

Their next idea is to make their way to a storage shed and drive their uncle's car to the training compound, where they believe they can call for help. The car won't start, however, and that night, with no other options, they continue to party. The power goes out, and Bhuvan heads to the fuse box in the basement, where he is killed by dogs who have managed to enter the house. Dogs then find their way into the rest of the cabin, and Justin is bitten. Sean, Justin, Hannah, Joel and Kaylen have to hide in the attic. There, they discover paperwork relating to the training facility, and learn it was an Army facility to train attack dogs.

The next morning, the dogs have left. Justin, Sean and Shelton make another attempt and manage to pop the clutch of their uncle's Ford. They went back to pick up the girls but Kaylen does not want to leave. The dogs attack her again, and in fighting one, Kaylen falls out of the window and impales herself and the dog on a post.

Justin, Sean, Hannah and Joel drive to the facility, which is abandoned. They break in and find out that the dogs were being genetically enhanced.

Sean finds communications equipment, but a power cable on the antenna has been disconnected, so he goes out to fix it. Justin, having been bitten, learns he can sense the dogs, and realizes if they escaped they can get back in. When the antenna is powered up, Sean is accidentally shocked by electricity, and when he falls to the ground the dogs attack him. Justin and Joel shows up with a baseball bats to fight off the dogs, but a power surge has caused a fire in the compound. Hannah realizes the fire is creating a backdraft, and lures in the dogs before exposing them to the fire.

Sean tells Justin and Joel that he saw a nearby boat, the same boat the couple brought to the island at the beginning of the movie. When dogs surround them, Hannah shows up in the Ford, they jump in and drive off. Because there are so many dogs, they cannot stop the car and get out, so Sean has Hannah drive the car off the pier. They swim to the boat and sail off.

Thinking they are safe, they wonder if they can make it to medical facilities before Justin and Sean fall victim to the dog bites.

In the last shot, they open the door to the sleeping quarters, and a vicious dog jumps out.

This film sees Nick Mastandrea's debut as a director. Each actor had almost a week of dog training before filming began in order to work on set, filming started in April 2005 and finished up about two months later. The film was shot mostly in South Africa. Nick Mastandrea in his debut film, recruited by Wes Craven to direct the movie after Mastandrea been Craven's first assistant director in the last released film which written and directed by Craven himself; Wes Craven's New Nightmare.

The Breed received a number of negative reviews, earning an approval rating of 17% on Rotten Tomatoes. 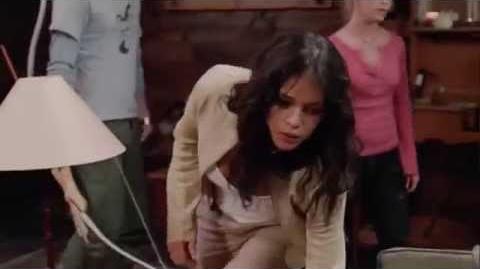 Retrieved from "https://horror.fandom.com/wiki/The_Breed_(2006)?oldid=151398"
Community content is available under CC-BY-SA unless otherwise noted.