This page needs improvement. It can be improved by: quote, pictures

The Conjuring: The Devil Made Me Do It

The Conjuring 2 (previously called The Conjuring 2: The Enfield Poltergeist) is the sequel to the film The Conjuring, released on June 10, 2016. The film is directed by James Wan. Both Wilson and Farmiga, who portrayed Ed and Lorraine Warren in the original film, reprised their role for this film.

Back in the 1970's, the Warrens investigated claims of demonic possession from a pair of sisters in Enfield, England. Over the course of the investigation the Warrens witnessed levitations, dematerialization, and had conversations with the demon itself.

In 1977, the Hodgson family begins to experience strange occurrences in their home in the London suburb of Enfield. Janet, the second oldest of four children, is seen sleepwalking and conversing in her dreams with an entity in the form of an angry elderly man, who insists that the house is his. Eventually, all the Hodgson siblings and their mother Peggy witness paranormal events occurring right before their eyes, forcing them to seek refuge with their neighbors. When the media attempts to interview the Hodgsons, Janet is possessed by the spirit of the elderly man, Bill Wilkins, who is revealed to have previously lived and died in the house. During the possession, Wilkins states that he enjoys tormenting the family and wants to reclaim his home. As Janet begins to show more signs of demonic possession, the story eventually reaches the Warrens, and their assistance is requested to assist the local church in an investigation to prove whether or not Janet's possession is a hoax. Lorraine, fearful that her vision of Ed's death may become reality, warns him not to get too involved in the case, but she reluctantly agrees to travel to London with him. She has yet another vision of the demonic nun in Ed's study wherein the demon says its name, which Lorraine scribbles in her Bible.

While staying at the Hodgson residence, Ed and Lorraine consult with other paranormal investigators, including Maurice Grosse and Anita Gregory, on the legitimacy of the case. They also attempt to communicate with Wilkins' spirit, hoping to convince him to stop haunting the family. One night, after the Hodgsons witness Janet being possessed, Gregory presents video evidence of Janet purposely wrecking the kitchen as if for a practical joke, thereby discrediting the haunting. Based on this discovery, Ed and Lorraine feel they have no choice but to leave the family on their own but soon discover that the spirit of Wilkins is only a pawn being manipulated by the demonic nun, to haunt Janet and break her will. Lorraine then realizes that her abilities have been blocked by the demonic nun, preventing her from grasping the truth of Janet's possession.

Ed and Lorraine quickly return to the Hodgson residence, only to find Janet being possessed once more and the rest of the Hodgsons locked outside the house. Ed ventures inside the house alone. A lightning strike hits a tree near the house, leaving a jagged stump resembling the object that impaled Ed in Lorraine's vision. Ed finds Janet standing near the window, ready to leap onto the stump and commit suicide. He manages to grab Janet in time, but finds himself holding onto a curtain that is being torn from its rings by his and Janet's weight. Lorraine remembers that she wrote the demon's name – Valak – in her Bible. She enters the house and confronts Valak, addressing it by name and successfully condemns it back to Hell. Janet is freed of its possession, and Lorraine pulls her and Ed to safety.

After returning home to the United States, Ed adds an item to his and Lorraine's collection – "The Crooked Man" zoetrope toy owned by Peggy's youngest child Billy – placing it near April's music box and the Annabelle doll.

The film was given an early release date of October 23, 2015. A close friend of the real Lorraine Warren, who discussed the upcoming film with her, described it as follows:

Upon its announcement, the film's story was immediately confirmed to not be a direct sequel to the first film as that would require the writers to visit the Amityville Haunting, which has been extensively covered by cinema already. The writers felt it necessary to focus on one of the Warren's lesser-known cases, much in the same way that they did with the case from the first film.

Director of the first film, James Wan, initially declined the offer to direct the second installment. However, Warner Bros. was eventually able to coax him into the position. This unfortunately meant that the film would not be ready in time for its initial release in 2015, so the official release date was pushed back to June 10, 2016.

Main article: The Nun
It was also announced that a spin-off based on Valak/Demon Nun from the film is being produced. Filming began in mid 2017 and the film is expected to be released on September 7, 2018. 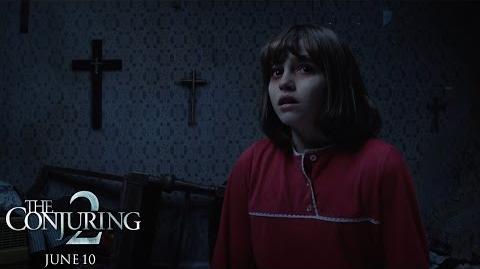 Retrieved from "https://horror.fandom.com/wiki/The_Conjuring_2_(2016)?oldid=149821"
Community content is available under CC-BY-SA unless otherwise noted.