The Gallows: Act II, also known as The Gallows 2, is a 2019 American supernatural horror film written and directed by Chris Lofing and Travis Cluff. It stars Ema Horvath, Chris Milligan and Brittany Falardeau.[1] It is the sequel to the 2015 film The Gallows. It was released on October 25, 2019 in theaters, on demand and digital by Lionsgate.

After aspiring actress Auna Rue transfers to a prestigious new school, her desires are twisted by a viral challenge capable of conjuring a malevolent spirit.

The film was shot in secret, intending for a 2018 release. Principal photography began in October 2016. The film didn't make their intended 2018 release, at this moment it is unknown when the film will be released.Principal photography on the film began in October 2016, with filming locations including San Joaquin College of Law.[2] [3] After filming and post-production was completed, a special early screening in August 2017, took place at the WB Lot in Burbank, California for fans aged 13-25.

According to Blumhouse Productions founder and CEO, Jason Blum, the film is scheduled to be released "within the next 9 months".[4] The film was released on October 25, 2019, in theaters, on-demand and digital by Lionsgate.[5] 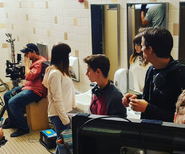 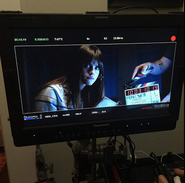 Retrieved from "https://horror.fandom.com/wiki/The_Gallows:_Act_II?oldid=140995"
Community content is available under CC-BY-SA unless otherwise noted.