The Hills Have Eyes 2

The Hills Have Eyes

The film follows several heroic, but troubled, U.S. National Guardsmen as they fight for survival against the mutant people living in a military base in New Mexico. The Hills Have Eyes 2 was directed by German film director Martin Weisz and written by father and son team Wes and Jonathan Craven.

The movie opens in the New Mexico desert, with the mutants from the first film having captured a woman who is being forced to breed mutant children. As soon as she has given birth, Papa Hades smashes her head in with a rock, killing her. Nearby, a group of scientists working in the desert hills are attacked by Letch. It is also hinted at the beginning of the film that the surviving members of the Carter family from the first film were not killed by Papa Hades' mutant clan and managed to escape the hills.

Some time later, a group of National Guard reservists in training are sent into the hills to resupply the scientists, who are working for the Department of Defense on installing a surveillance system (implied to be a result of the events in the first film). The soldiers arrive to find the camp apparently abandoned, with no sign of their commanding officer or any of the civilians, with outside radio contact impossible due to the topography. When the radio operator, Spitter, picks up a faint distress call, the sergeant organizes a rescue mission, leaving behind Napoleon and Amber.

The search party discovers the mutilated body of a scientist in the hills, while Amber and Napolean pull another mutilated and dying scientist from beneath the portable toilet. On her way to join the group, Amber is attacked by Stabber, but a returning (and injured) Mickey drives him off. Just as Napoleon catches up, Mickey is pulled into a bolt-hole and killed. At the same time, the remaining troops are also attacked by Letch, leading to the sergeant being killed by Spitter's friendly fire. Spitter himself is later killed by an unseen mutant sabotaging his rappelling gear.

The troop soon locates their commanding officer, who has clearly become unhinged from recent events. He warns them of the mutants' plans to capture women for breeding and kill everyone else, then commits suicide. With their remaining gear stolen, the team is forced to try to find another way down the mountain. In the process, Missy is captured and taken into the tunnels by Chameleon, where she is raped, while the remaining troop chases after her. They manage to kill mutants Chameleon and Grabber, but Stump and Delmar are also killed. Crank is also killed by a trapped crate of dynamite.

While in the mines, the troop locate a non-violent mutant named Hansel who eventually shows them the way out of the mines, but Amber insists on returning to find Missy. They find and free her, then have a final showdown with Papa Hades. The final three National Guard troops—Amber, Napoleon, and Missy—make their way out of the mine, seemingly alive and safe. However, the epilogue text in the closing scene indicates that none of the guardsmen were ever found, and at least one mutant is seen alive, and making use of the high-tech surveillance equipment to watch the survivors.

Writer Wes Craven's initial inspiration for the film came during a casual conversation with producer Peter Locke. Craven envisioned that the previous film's character, Brenda, traumatized by her suffering during the events of The Hills Have Eyes, joins the National Guard to overcome her fears. Barely finished with basic training, Brenda receives a call from her sergeant, who explains that they are sending a team back to the New Mexico desert to eradicate the remaining mutants. Her sergeant and the team need her, for she is the only one left alive who knows the mutants' location. Because of de Ravin's involvement in the television show Lost, her schedule was unable to accommodate the filming of the sequel. Wes Craven replaced her character, but retained much of the original concept, including the group of National Guard soldiers in training.

A one-minute teaser trailer was released on December 12, 2006. The teaser featured "Insect Eyes," a song by indie folk recording artist Devendra Banhart. In addition to that, a series of clips with an introduction by Wes Craven and a small gallery can be found on the Fox Atomic website. Also on Fox Atomic is a soundless clip of the mutant Grabber attacking Amber. Later on a full length trailer and two clips were released to Yahoo! Movies.

Craven originally looked at Michael J. Bassett, the director of Deathwatch, to take over the directing role, but ultimately chose Martin Weisz after scheduling conflicts with Bassett.

The Hills Have Eyes 2 received mostly negative reviews, garnering a 11% freshness rating from review aggregator Rotten Tomatoes. It grossed $37,405,247 worldwide. The film also grossed over $30 million in domestic DVD sales, for a total of $67,915,885. 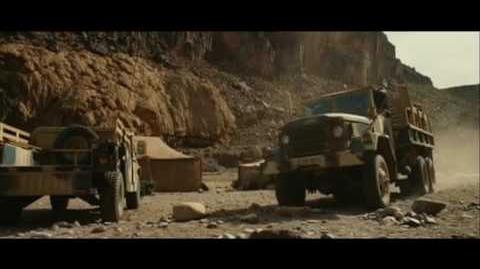 The Hills Have Eyes 2 Trailer HD

Retrieved from "https://horror.fandom.com/wiki/The_Hills_Have_Eyes_2_(2007)?oldid=139756"
Community content is available under CC-BY-SA unless otherwise noted.