Start a Wiki
This page needs improvement. It can be improved by: quote, information, pictures, external links

The Hitcher is a 1986 American road action-horror film directed by Robert Harmon and written by Eric Red It stars Rutger Hauer, C. Thomas Howell, Jennifer Jason Leigh and Jeffrey DeMunn. Howell plays Jim, a young man who gives a ride to a hitchhiker, played by Hauer. After narrowly escaping death, Jim repeatedly encounters the hitchhiker, who is revealed to be a serial killer, and the two engage in a game of cat and mouse.

Jim Halsey, a young man delivering a car from Chicago to San Diego, spots a man hitchhiking in the West Texas desert and gives him a ride. The hitcher, John Ryder, is brooding and evasive; when Jim passes a stranded car, however, Ryder forces his leg down on the accelerator. Ryder calmly states he murdered the driver and intends to do the same to Jim. Terrified, Jim asks what Ryder wants. He replies, "I want you to stop me." Ryder strokes Jim's face with a knife while telling him to say, "I want to die." When Jim realizes that Ryder never put on his seat belt and the car's passenger door is ajar, he shoves him out of the door. Relieved, Jim continues on his journey. When he sees Ryder in the back of a family car, Jim tries to warn them but becomes involved in an accident. He later comes across the family's blood-soaked car and vomits. At a nearby abandoned gas station, Ryder corners Jim but simply tosses him the keys he took from Jim's car. After Ryder leaves with a trucker, Jim encounters him again at another gas station, where the truck nearly runs him down as it crashes into the pumps. As Jim flees, Ryder ignites the spilled gas and causes the station to explode. At a roadside diner, Jim meets Nash, a waitress, and calls the police. As Jim relaxes, he finds a severed finger in his food and realizes Ryder is present. The police arrive and, after finding Ryder's knife in Jim's pocket, arrest him. Though the police doubt his guilt, they lock him up overnight as protocol. When Jim wakes, he finds the cell door unlocked, and all the officers are dead. Jim panics, takes a pistol, and flees. At a gas station, he sees two officers, takes them hostage, and speaks to Captain Esteridge on the radio. As Esteridge convinces Jim to surrender, Ryder pulls up alongside them and kills the two officers. The patrol car crashes, and Ryder disappears again. After briefly considering suicide, Jim reaches a cafe, where Ryder suddenly confronts him. After pointing out Jim's pistol is unloaded, Ryder leaves him several bullets and departs. Jim boards a bus, and meets Nash and attempts to explain his situation. After a police car pulls over the bus, Jim surrenders, and the furious officers accuse him of killing their colleagues. As the officers goad Jim into a fight, Nash appears with Jim's pistol, disarms the officers, and flees with Jim in their patrol car. As the police chase after them, their car crashes, and Ryder shoots down a helicopter, causing the police cars to also crash. Jim and Nash abandon the patrol car and hike to a motel. While Jim is in the shower, Ryder abducts Nash. While Jim searches for her, Captain Esteridge takes him to two trucks with Nash tied between them. Ryder is at the wheel of one truck and threatens to tear Nash apart. Esteridge tells Jim that his men cannot shoot Ryder as his foot will slip off the clutch, which will cause the truck to roll and kill Nash. Jim enters the cab with Ryder, who gives him a pistol and tells him to shoot, but Jim is unable. Ryder, disappointed, releases the clutch, killing Nash. Ryder is taken into custody. Esteridge gives Jim a ride, but, having no confidence in the police, Jim suddenly takes the officer's pistol and vehicle to chase down Ryder's prison bus. As Jim catches up, Ryder arms himself with a shotgun, kills the deputies, and leaps through Jim's windshield as the bus crashes. Jim slams on his brakes, sending Ryder through the windshield and onto the road in front of Jim's stalled vehicle. As Ryder shoots at him, Jim frantically restarts the car. Ryder challenges Jim to run him over, which he does. As Jim leaves his car to observe Ryder's lifeless corpse, Ryder suddenly jumps up, and Jim shoots him. As the sun sets, Jim realizes his ordeal is finally over.

The review aggregator Rotten Tomatoes gave the film a 61% approval rating based on 33 reviews. Roger Ebert awarded it no stars and wrote, "But on its own terms, this movie is diseased and corrupt. I would have admired it more if it had found the courage to acknowledge the real relationship it was portraying between Howell and Rutger, but no: It prefers to disguise itself as a violent thriller, and on that level it is reprehensible". In her review for The New York Times, Janet Maslin wrote, "Mr. Harmon, making his feature debut, displays a much surer hand for action than for character, though even some of the action footage here looks meaninglessly overblown". In his review for the Washington Post, Paul Attanasio wrote, "The script (by Eric Red) is laconic in a dull way, much Cain but hardly able. And Harmon and his cinematographer, John Seale, have shot the movie in such brown murk, you can hardly make anything out. By the end, you're willing to forgive Ryder his worst if someone would just change the light bulb". In his review for the Globe and Mail, Jay Scott described the film as a "slasher movie about gay panic, a nasty piece of homophobic angst for the age of AIDS". A rare positive review came from Newsweek magazine's Jack Kroll who called it, "an odyssey of horror and suspense that's as tightly wound as a garrote and as beautifully designed as a guillotine". Leonard Maltin awarded the film a score of 2 1/2 out of a possible 4 stars, criticizing the film's violence as being "genuinely grisly and unappealing" while also stating that the film wasn't without interest. One of the film's producers said that the film's commercial failure was because of a lack of violence and that Nash's death should have been shown: "There's other gore in the movie, other killings, but this is the main one. It's the motivation for the hero. You can't show all the killings we showed and then not show the main one. It's cheating the audience". Hauer said critics misunderstood the film. According to him, it is an allegory in which Ryder represents evil.

The film spawned a sequel in 2003, The Hitcher II: I've Been Waiting, with Howell returning to the role of Jim Halsey. A remake, produced by Michael Bay and directed by Dave Meyers, was released on January 19, 2007, which starred Sean Bean as John Ryder, Zachary Knighton as Jim Halsey, and Neal McDonough as Esteridge. The remake added a female protagonist named Grace Andrews, who was portrayed by Sophia Bush. In the film, Andrews survives, while Halsey suffers Nash's fate. The movie was released to generally negative reviews. 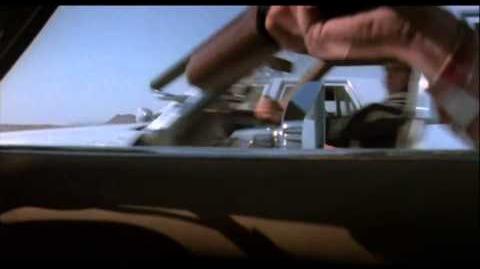 Retrieved from "https://horror.fandom.com/wiki/The_Hitcher_(1986)?oldid=128496"
Community content is available under CC-BY-SA unless otherwise noted.