The Mummy is a 1932 American Pre-Code horror film directed by Karl Freund. The screenplay by John L. Balderston was from a story by Nina Wilcox Putnam and Richard Schayer. Released by Universal Studios, the film stars Boris Karloff, Zita Johann, David Manners, Edward Van Sloan and Arthur Byron. The film is about an ancient Egyptian mummy named Imhotep who is discovered by a team of archeologist and inadvertently brought back to life through a magic scroll. Disguised as a modern Egyptian, the mummy searches for his lost love, whom he believes has been reincarnated into a modern girl.

An ancient Egyptian priest called Imhotep (Boris Karloff) is revived when an archaeological expedition in 1921, led by Sir Joseph Whemple (Arthur Byron), finds Imhotep's mummy. Imhotep had been mummified alive for attempting to resurrect his forbidden lover, the princess Ankh-es-en-amon. Whemple's friend, Dr. Muller (Edward Van Sloan) inspects the mummy and exclaims "The viscera were not removed. The usual scar made by the embalmers knife is not there." Sir Joseph Wimple responds, "I guessed as much." Muller then deduces that Imhotep was buried alive for sacrilege. Despite Muller's warning, Sir Joseph's assistant Ralph Norton (Bramwell Fletcher) reads aloud an ancient life-giving scroll – the Scroll of Thoth. Imhotep escapes from the archaeologists, taking the Scroll of Thoth, and prowls Cairo seeking the modern reincarnation of Ankh-es-en-amon.

10 years later, Imhotep is masquerading as a modern Egyptian named Ardath Bey. He calls upon Sir Joseph's son Frank (David Manners) and Prof. Pearson (Leonard Mudie). He shows them where to dig to find Ankh-es-en-amon's tomb. The archaeologists find the tomb, give the mummy and the treasures to the Cairo Museum, and thank Ardath Bey for the information.

Imhotep encounters Helen Grosvenor (Zita Johann), a woman bearing a striking resemblance to the Princess. Believing her to be Ankh-es-en-amon's reincarnation, he attempts to kill her, with the intention of mummifying her, resurrecting her, and making her his bride. She is saved when she remembers her past life and prays to the goddess Isis to save her. The statue of Isis raises its arm and emits a beam of light that sets the Scroll of Thoth on fire. This breaks the spell that had given Imhotep his immortality, causing him to age rapidly and then crumble to dust. At the urging of Dr. Muller, Frank calls Helen back to the world of the living while the Scroll of Thoth continues to burn.

In Order of Appearance:

Unlike Frankenstein and Dracula, and other Universal horror films, this film had no official sequels, but rather was semi-remade in The Mummy's Hand (1940); and its sequels: The Mummy's Tomb (1942), The Mummy's Ghost (1944), and The Mummy's Curse (1944). These were later followed up in the spoof Abbott and Costello Meet the Mummy (1955). These films focus on the mummy named Kharis. The Mummy's Hand recycled footage from the original film for use in the telling of Kharis' origins; Karloff is clearly visible in several of these recycled scenes, but he is not credited.

The much later Universal film The Mummy (1999) also suggests that it is a remake of the 1932 film, but has a different story line. However, in common with most postmodern remakes of classic horror and science-fiction films, it may be considered as such in that its titular character is again named Imhotep, resurrected from the dead by the Book of the Dead, and out to find the present-day embodiment of the soul of his beloved Anck-su-namun, and features an Egyptian named Ardeth Bay (in this case, a guard of the city and of Imhotep's tomb). This film spawned a sequel with The Mummy Returns (2001), and a prequel spin-off of that sequel, The Scorpion King (2002), which in turn spawned a prequel,The Scorpion King 2: Rise of a Warrior (2008), and a sequel, The Scorpion King 3: Battle for Redemption (2012). Another sequel to the film series titled, The Mummy: Tomb of the Dragon Emperor was released in 2008. Also a short-lived animated series simply titled The Mummy ran from 2001 to 2003.

Universal has announced another forthcoming remake of the film. The new film will be directed by Alex Kurtzman. In October 2015, Kurtzman hinted that the new reboot could possibly feature a female lead as the mummy character which would be the first for the film franchise. Universal's The Mummy is planned as the first film in a series of interconnected monster films as Universal plans to build a franchise out of its vault of classic movies. On January 21, 2016 it was announced that Tom Cruise would be starring in the remake, which is slated for release on June 9, 2017. 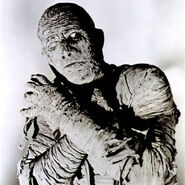 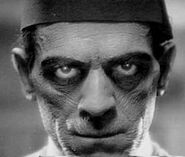 Retrieved from "https://horror.fandom.com/wiki/The_Mummy_(1932)?oldid=132604"
Community content is available under CC-BY-SA unless otherwise noted.