The Silence of the Lambs

The Silence of the Lambs is a 1991 American neo-noir psychological horror film directed by Jonathan Demme from a screenplay written by Ted Tally, adapted from Thomas's 1988 novel of the same name. The film stars Jodie Foster, Anthony Hopkins, Scott Glenn, Ted Levine, and Anthony Heald.

The novel was Harris's first and second respectively to feature the characters of Starling and Lecter, preceded by the Michael Mann-directed Manhunter (1986).

Clarice Starling, a young FBI trainee, seeks the advice of the imprisoned Dr. Hannibal Lecter, a brilliant psychiatrist and cannibalistic serial killer to apprehend another serial killer, known only as "Buffalo Bill", who skins his female victims' corpses.

Warning: this text contains details about the plot/ending of the film.
FBI trainee Clarice Starling, is pulled from her training at the FBI Academy at Quantico, Virginia by Jack Crawford of the Bureau's Behavioral Science Unit. He assigns her to interview Hannibal Lecter, a former psychiatrist and incarcerated cannibalistic serial killer, whose insight might prove useful in the pursuit of a serial killer nicknamed "Buffalo Bill", who skins his female victims' corpses.

Starling travels to the Baltimore State Hospital for the Criminally Insane, where she is led by Frederick Chilton to Lecter's solitary quarters. Although initially pleasant and courteous, Lecter grows impatient with Starling's attempts at "dissecting" him and rebuffs her. As she is leaving, one of the prisoners flicks semen at her. Lecter, who considers this act "unspeakably ugly", calls Starling back and tells her to seek out an old patient of his. This leads her to a storage shed, where she discovers a man's severed head with a sphinx moth lodged in its throat. She returns to Lecter, who tells her that the man is linked to Buffalo Bill. He offers to profile Buffalo Bill on the condition that he may be transferred away from Chilton, whom he detests.

Buffalo Bill abducts a Senator's daughter, Catherine Martin. Crawford authorizes Starling to offer Lecter a fake deal, promising a prison transfer if he provides information that helps them find Buffalo Bill and rescue Catherine. Instead, Lecter demands a quid pro quo from Starling, offering clues about Buffalo Bill in exchange for personal information. Starling tells Lecter about the murder of her father when she was ten years old. Chilton secretly records the conversation and reveals Starling's deceit before offering Lecter a deal of Chilton's own making. Lecter agrees and is flown to Memphis, where he verbally torments Senator Ruth Martin, and gives her misleading information on Buffalo Bill, including the name "Louis Friend".

Starling notices that "Louis Friend" is an anagram of "iron sulfide"–fool's gold. She visits Lecter, who is now being held in a cage-like cell in a Tennessee courthouse, and asks for the truth. Lecter tells her that all the information she needs is contained in the case file. Rather than give her the real name, he insists that they continue their quid pro quo and she recounts a traumatic childhood incident where she was awakened by the sound of spring lambs being slaughtered on a relative's farm in Montana. Starling admits that she still sometimes wakes thinking she can hear lambs screaming, and Lecter speculates that she is motivated to save Catherine in the hope that it will end the nightmares. Lecter gives her back the case files on Buffalo Bill after their conversation is interrupted by Chilton and the police, who escort her from the building. Later that evening, Lecter kills his guards, escapes from his cell, and disappears.

Starling analyzes Lecter's annotations to the case files and realizes that Buffalo Bill knew his first victim personally. Starling travels to the victim's hometown and discovers that Buffalo Bill was a tailor, with dresses and dress patterns identical to the patches of skin removed from each of his victims. She telephones Crawford to inform him that Buffalo Bill is trying to form a "woman suit" out of real skin, but Crawford is already en route to make an arrest, having cross-referenced Lecter's notes with hospital archives and finding a transsexual woman named Jame Gumb, who once applied unsuccessfully for a sex-change operation. Starling continues interviewing friends of Buffalo Bill's first victim in Ohio, while Crawford leads an FBI HRT team to Gumb's address in Illinois. The house in Illinois is empty, and Starling is led to the house of "Jack Gordon", who she realizes is actually Jame Gumb, again by finding a sphinx moth. She pursues him into his multi-room basement, where she discovers that Catherine is still alive, but trapped in a dry well. After turning off the basement lights, Gumb stalks Starling in the dark with night-vision goggles, but gives his position away when he cocks his revolver. Starling reacts just in time and fires all of her rounds at Gumb, killing him.

Sometime later, at the FBI Academy graduation party, Starling receives a phone call from Lecter, who is at an airport in Bimini. He assures her that he does not plan to pursue her and asks her to return the favor, which she says she cannot do. Lecter then hangs up the phone, saying that he is "having an old friend for dinner", and starts following a newly arrived Chilton before disappearing into the crowd.

Orion Pictures decided to bring the novel to the big screen and sought director Jonathan Demme to helm the project. Demme signed on after reading the novel despite the screenplay not yet completed.  From there, the project quickly took off.

Jodie Foster was interested in playing the role of Clarice Starling immediately after reading the novel. However, in spite of the fact that Foster had just won an Academy Award for her performance in The Accused (1988), Demme was not convinced that she was right for the role. Demme's first choice for the role of Starling was Michelle Pfeiffer, who turned it down, because it made her nervous. Still not convinced, he approached Meg Ryan who turned it down as well for its gruesome themes. After that he offered the role to Laura Dern, of whom the studio was skeptical as not being a bankable choice. As a result, Foster was awarded the role due to her passion towards the character.

For the role of Dr. Hannibal Lecter, Demme originally approached Sean Connery. After the actor turned it down, Anthony Hopkins was then offered the role based on his performance in The Elephant Man (1980). The mask Hopkins wore became an iconic symbol for the film. It was created by Ed Cubberly, of Frenchtown, New Jersey, who had made numerous masks for NHL goalies.

The principal photography on the movie began on November 15, 1989 and was wrapped on March 1, 1990. The filming of it primarily took place in and around Pittsburgh, Pennsylvania, with some scenes shot in nearby northern West Virginia. Finally, in what was a rare act of cooperation at the time, the FBI allowed scenes to be filmed at the FBI Academy in Quantico; some FBI staff members even acted in bit parts.

The Silence of the Lambs was released on February 14, 1991, and grossed $272.7 million worldwide against its $19 million budget, becoming the fifth-highest grossing film of 1991 worldwide. The film premiered at the 41st Berlin International Film Festival, where it competed for the Golden Bear, while Demme received the Silver Bear for Best Director. Critically acclaimed upon release, it became only for the third film, (the other two being It Happened One Night (1934) and One Flew Over the Cuckoo's Nest (1975)), to win Academy Awards in all the top five categories: Best Picture, Best Director, Best Actor, Best Actress, and Best Adapted Screenplay. It it also the first (and so far only) Best Picture winner widely considered to be a horror film, and one of only six such films to be nominated in the category, along with The Exorcist (1973), Jaws (1975), The Sixth Sense (1999), Black Swan (2010) and Get Out (2017).

The Silence of the Lambs was critically acclaimed by critics. 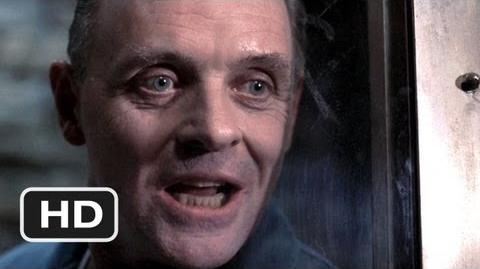 Retrieved from "https://horror.fandom.com/wiki/The_Silence_of_the_Lambs_(1991)?oldid=147246"
Community content is available under CC-BY-SA unless otherwise noted.