This page needs improvement. It can be improved by: pictures, information/trivia, list of deaths, quote

Lust for a Vampire

The Vampire Lovers is a 1970 British Hammer Horror film, directed by Roy Ward Baker, starring Peter Cushing, Polish actress Ingrid Pitt, Madeline Smith, Kate O'Mara, and Jon Finch. It is based on the J. Sheridan Le Fanu novella Carmilla and is part of the so-called Karnstein Trilogy of films. The other films in the trilogy are Lust for a Vampire (1971) and Twins of Evil (1972).

The three films were somewhat daring for the time in explicitly depicting lesbian themes. In the early 1980s an Australian punk group named themselves Vampire Lovers in a tribute to the film.

Seductive vampire Carmilla Karnstein and her family target the beautiful and the rich in a remote area of late eighteenth-century Gemany.

In early 19th century Styria, a beautiful blonde in a diaphanous gown materialises from a misty graveyard. Encountering the Baron Hartog, a vampire hunter out to avenge the death of his sister, the girl is revealed as a vampire when her breast is seared by his crucifix. Baring her fangs to attack the Baron, she is swiftly decapitated.

Many years later, a sultry dark-haired lady leaves her daughter Marcilla in the care of General von Spielsdorf and his family at their Styrian mansion. Marcilla quickly befriends the General's niece, Laura. Laura suffers nightmares that she is being attacked, and her health deteriorates until she dies. Marcilla vanishes from the General's home.

Faking a carriage break-down, Marcilla's mother leaves her (now using the alias Carmilla) at the residence of a Mr Morton. Here, Carmilla befriends and seduces Morton's daughter Emma, but her need to feed overcomes her emotional attachment and Emma too begins to fade. Emma has nightmares of being pierced over the heart, and her breast shows tiny wounds. Emma's governess, Mme. Perrodot also falls victim to Carmilla's erotic blandishments and becomes her willing tool. Some in the household, the butler and a doctor, suspect what might be happening, especially in the wake of several local girls suddenly dying, but Carmilla kills each one. All the while, a mysterious man in black (clearly also a vampire) watches events from a distance, smiling (his presence is never explained).

After Carmilla kills the butler, having convinced him that Mme. Perrodot is a vampire then persuaded him (with her womanly charms) to remove the garlic protecting Emma, Carmilla goes to Emma's bedroom. She says she must go away, but is taking Emma with her. A desperate and sick Madame begs Carmilla to take her with her. Carmilla kills her, in front of a horrified Emma. Emma is barely rescued by a young man named Carl who fashions a makeshift cross from his dagger. Carmilla flees to her nearby ancestral castle, now a ruin.

All this coincides with the arrival of the General, who brings with him a now-aged Baron Hartog. They find Carmilla's grave, where she sleeps. The General lifts a stake—and back in her bedchamber Emma screams "No!"—then drives it into Carmilla's heart. He then cuts off her head. Carmilla's portrait on the wall decays, showing now a fanged skeleton instead of a beautiful young woman. 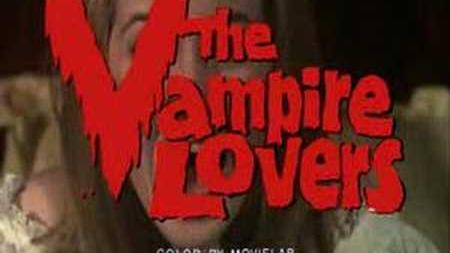 Retrieved from "https://horror.fandom.com/wiki/The_Vampire_Lovers_(1970)?oldid=130064"
Community content is available under CC-BY-SA unless otherwise noted.