This page is about the remake. For the original film, see The Wolf Man (1941).

The Wolfman is an American horror film and a remake of the 1941 Universal Classic, The Wolf Man. The film is directed by Joe Johnston and stars Benicio del Toro, Anthony Hopkins and Hugo Weaving.

The film opens with the old gypsy women, Maleva, saying the poem (even a man who is pure of heart and says his prayers by night, may become a wolf when the wolfbane blooms and the autum moon is bright).

The film then starts with Ben Talbot walking through the woods of Blackmoor (the woods near Talbot Manor). Suddenly, a wolf-like creature attacks Ben, slashing his chest and face. Ben attempts to escape, but the beast kills him. Then a howl is heard.

Gwen Conliffe, Ben's fiancée, has contacted his brother, Lawrence Talbot, the world-renowned Shakespearean actor, saying that Ben disappeared a month ago. Lawrence leaves his theatre tour to return to his family's estate in Blackmoor where he has an uneasy reunion with his estranged father, Sir John Talbot. Ben's body, found the day before, has been stored at a slaughterhouse. When Lawrence views his brother's remains, he is horrified, The body is completely mauled. Among Ben's personal effects is a medallion that Ben apparently purchased from gypsies. Later at the local pub, Lawrence overhears the locals discussing the killing. Many blame the gypsies who are camped outside the town, while another patron claims there was a similar murder several decades earlier, and a werewolf was the suspected killer. The same night Lawrence has flash backs as he tours his old family's home. It is revealed that Lawrence's mother, Solana, had committed suicide when he was a boy. Lawrence saw his father standing over her dead body, after which he was sent to an insane asylum in London, ostensibly for suffering delusions.

After Ben's funeral and Gwen's departure for London, Lawrence decides to go to the gypsy camp and find out the truth. Even though, Sir John warns him not to, Lawrence ignores and travels to the gypsy camp, where he meets Maleva. She tells him that only something evil had slew his brother. But just then, the villagers come to the camp to pick up the gypsy's dancing bear (as they suspect him of being the killer).

But suddenly, a wolf-like beast attacks and slays countless people (inlcuing a few gypsies and a policeman). Lawrence pursues the beast as it runs off into the woods, but he is attacked and bitten on the shoulder by the beast. The gunmen gypsies chase the beast off before it can kill Lawrence.

They take Lawrence to the camp to Maleva. As Maleva sows up his wounds, her daughter states that they should kill him, but Maleva refuses, saying that only a loved one can save him. They return Lawrence home to Talbot Manor, where Gwen arrives and looks after Lawrence. After suffering a few hallucinations and dreams, Lawrence recovers and they suddenly realise that his wound has just healed itself. Later when Lawrence looks at the wound in the mirror, he finds that the wound has just faded away.

He goes to Singh (Sir John's Sikh manservant) and talks to him about curses while Singh tells Lawrence about how he wanted to stay and stand the curses in Talbot Manor, saying because the reason was that Sir John had saved his life once in the past. Days later, Inspector Aberline arrives to inspect the murders that have recently happened. First, going to Talbot Manor and questioning Lawrence about what he saw that attacked him. A few hours after the inspector leaves, Talbot and Gwen talk and they begin to form a romantic attraction.

After some villagers arrive to pick up Talbot, as they suspect him of being a beast, but they are persuaded to leave by Sir John. Afterwards, Lawrence thinks about what they say and begins to realise what's happening to him. Afraid of what might happen he sends Gwen away back to London saying that it wasn't safe there. He then follows Sir John talbot to Solana's crypt. He tells Lawrence that he has been "dead" for years, then locks himself into the room alone. Lawrence then undergoes a very painful transformation into the Wolfman before running off into the woods and killing the hunters stationed there (including Dr. Lloyd and the colonel).

The next morning, Aberline finds Lawrence (now human but in a bloody mess) and they pick him up, while SirJohn in the background is saying "You've done terrible things, Lawrence. Be strong." Lawrence is sent back to the same London asylum that he was sent to when he was a child. He is again tortured and injected by them, overlooked by the sadistic Dr Honneger. During all of this, Lawrence begins to have strange nightmares.

Later while in his asylum cell, Lawrence is visited by Sir John. Sir John tells him the truth. He tells him about his past life: that while hunting in India, the natives had directed him to a cave in the mountains, where there lived a "strange creature". After climbing and searching for days, Sir John found the cave and the creature there: it was a little wild, powerfully strong, feral boy infected with lycanthropy, who had attacked Sir John and bit him.

Lawrence suddenly realises that he saw Sir John kill Solana in his werewolf form, revealing that Sir John was a werewolf and that he had been behind everything. Sir John told Lawrence that afterwards, he had depended on Singh to lock him away in the crypt during full moon nights. However, after Gwen had come to take Ben away from Talbot Manor, Sir John had become drunk and violent, so when Singh had tried to restrain him and lock him up, Sir John lashed out and knocked him out cold.

Having been unable to lock himself in the crypt, Sir John had killed Ben and those two other villagers. Sir John revealed that he had also transformed again the night Lawrence went to the gypsy camp and had been the creature that attacked and bit Lawrence. Lawrence now realises that he is now a werewolf. Now intoxicated by the werewolf's immense power, Sir John reveals that he no longer intends to lock up the beast in him, saying "I should have let it run free, kill or be killed". Sir John then leaves, but not before telling Lawrence that the moon will be full again.

On the night of the full moon, Dr. Hoenneger presents Lawrence, strapped in a chair, to his colleagues as an interesting case study. Inspector Aberline is also present. Dr. Hoenneger tries to explain to Lawrence that it is his imagination that he will turn into a werewolf but not actually turn in to one. Lawrence tries to warn Dr. Hoenneger but he goes on with his lecture.

Suddenly, the full moon shines through the window and Lawrence once again transforms into the wolfman in front of all of the spectators and the inspector. They now believe him, but only too late. The wolfman breaks free of his straps, kills Dr. Honneger and several other spectators and escapes the asylum into the streets of London, with  a shocked Aberline and the authorities chasing after through the city. The wolfman goes on a bloody and ferocious rampage of London, killing dozens and managing to escape the authorities.

The next morning, a now human Lawrence hides from the authorities and finds Gwen. He tells her the truth and learns that the whole world knows the monster inside Lawrence and that the authorities are after him, with newspapers about it to follow. Gwen pleads Lawrence to stay so that she can help him, but Lawrence refuses, saying that he must get back to Talbot Manor and find his father.

But before he does, the two realise that they're falling in love and they kiss. But suddenly, Aberline arrives and searchs the shop, but by then, Lawrence had already left and was headed for Blackmoor. Lawrence arrives at Talbot Hall and finds Singh's mutilated body hanging in the foyer. He loads a gun with Singh's silver bullets, but when he attempts to shoot Sir John Talbot, he discovers that Sir John had secretly removed the powder from the cartridges years ago. When the full moon rises, both transform into werewolves.

A vicious final fight erupts and the house is set on fire. Sir John proves to be the most powerful of the two monsters, gaining the upper hand for most of it, but Lawrence soon gains the advantage and kicks his evil father into the fireplace, slashs him and then beheads him, killing Sir John Talbot. The Wolfman then victoriously howls.

Gwen arrives hoping to save Lawrence, followed by Aberline, who attempts to shoot the Wolfman. Gwen disrupts the shot and then flees with Aberline's revolver. The Wolfman bites Aberline and Aberline try to stop him from going after Gwen but is too weak, so the Wolfman chases Gwen rather than finish Aberline off.

The Wolfman traps Gwen above a gorge. She pleads with Lawrence, whose consciousness faintly recognises her. As he hesitates, the mob is coming and the Wolfman turns to look at them. Meanwhile Gwen picks up the revolver (that she got before fleeing) the Wolfman turns to her and is about to bite her but she shoots him with a silver bullet just in time. The Wolfman then slumps down weakly and reaches out and grab Gwen's hand. Started, she shrieks, yet realize his hand, arm, face and whole body is turning back human. As he lies dying, Lawrence thanks Gwen for doing what needed to be done. The wounded Aberline arrives (carrying the wolf cane Lawrence first had), along with the mob of Hunters, as Lawrence dies in peace. Aberline and Gwen looks with horror at the bite wound in his shoulder and then at the moon and realises what will be his inevitable fate.

After the camera cuts back to a burning Talbot Manor, the wolfman's howl is heard once more, indicating that Aberline has become the new wolfman, having been biten by Lawrence. Then the credits roll. 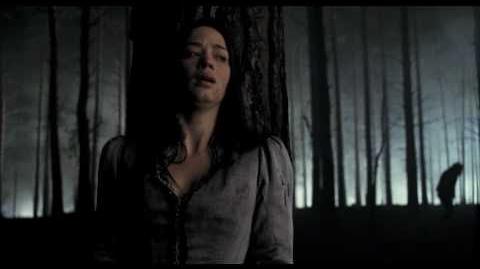 Retrieved from "https://horror.fandom.com/wiki/The_Wolfman_(2010)?oldid=138607"
Community content is available under CC-BY-SA unless otherwise noted.