Tina Blake is a character from the Carrie films and the novel and one of the main villains in the overall series.

Tina Blake participated in the shower prank and was punished for it, like the other girls and, though it is not specifically said, It is implied in the novel, that Tina Blake, together with Norma Watson helped in the set up of Carrie White by manipulating the elections correspondingly, so that Carrie and Tommy would be elected Prom King and Queen and placed under the buckets full of pigs blood. They were able to do that, because they collected the ballots for the election. They survive the Black Prom massacre, but it is implied, they live hidden from the world out of fear, their part in the conspiracy could come out.

Tina Blake in this film is a very minor non-speaking character. The role of Tina from the novel is instead combined with Norma Watson, and is played by P.J.Soles.

Norma first appears in the very first scene, playing volleyball. After Carrie loses her team the game, Norma strikes Carrie across the head with her red baseball cap (which she is never seen without for the rest of the movie), and disappears inside. Norma is one of the girls, who encounters Carrie covered in period blood, and, with Christine and another girl named Sue Snell (Amy Irving), Norma threw tampons at Carrie. She enjoyed doing that without showing any remorse.

Norma is next seen in a classrooms spit balling with another student. She appears to have a secret crush on Tommy Ross (William Katt) and is often seen smiling at him. Norma is then seen at the detention and tries to persuade (Chris Hargensen (Nancy Allen) not to act up, as she wanted her to attend the prom. Norma is also seen doing gym with her iconic baseball cap and is shouted at by the teacher to do it properly. When Chris tries to rebel against the punishment, she doesn't go along with it, but she still decides to go along with the conspiracy to humiliate Carrie during the prom.

At the prom, Norma was even seen collecting the ballots for prom king and queen. When she collected the one from Tommy Ross and Carrie's table, she smiled with a stranger sort of glee...until she headed to where another conspirator, Freddy De Louis was waiting to collect her ballots. Here, Freddy dropped the collection of ballots behind Norma while she pulled out another set of "ballots" from within the former's tuxedo coat (all while kissing as a front). Anyhow, Norma approached the prom committee and handed the rigged ballots to them and afterwards, headed directly to a stairwell to give a signal to two suspicious individuals hiding under the gymnasium stage, where the prom king and queen would be crowned.

Later, after pig's blood was "mysteriously" dumped on Carrie's head, Norma was among the first to laugh at the terrible sight. She couldn't contain herself, because the plan had worked so perfectly (or so she and mostly everyone else thought).

Norma attempted to leave with Freddy and Kenny "Kenneth" Garson, satisfied with their work, but, when Freddy and Kenny became ultimately trapped between two locked gym doors, Norma was heard screaming and yelling as she and another two girls were pushed and thrown around by the frantic crowd. Norma was seen running around, desperately trying to find another exit door. When the fire hose came out of control and turns on by itself, Norma was shocked to see it knocking many students out cold. Norma tried to escape the blast of the fire hose, but to no succeeds and it hit her harder than anybody as she fell on top of a table, killing her instantly as she died with her eyes closed as her heart slowly stops beating. It is likely, Norma's body was burned like a grilled red snapper, when Carrie ignited the fire in the gym, which destroyed the High School for real.

In this version Tina is played by Katharine Isabelle. She was Chris Hargensen's best friend and very popular. Like Chris, she tormented Carrie. During the baseball game she begins saying "Miss, miss, miss, miss..." to Carrie and when Christine is kicked out of school Tina confronts Carrie in class, blaming her for it. During prom she gave Carrie a dirty look. She counterfeits the ballots to ensure that Carrie and Tommy win. When it was time for the prank, she waited for Christine to pull the bucket, looking up at her, causing Helen Shyres to notice. When Carrie got drenched in the pigs blood both Tina and her date, Kenny Garson, laughed at her and didn't stop even after Tommy is killed because of the emptied bucket, which Christine later threw on the stage. Most people played along. When Tina and Kenny attempt to leave after Helen slapped Kenny because of his despicable behavior, Carrie telekinetically shuts and locks all the exit doors in anger, one which Kenny's arm was reaching through, causing him to be trapped. People begin crowding around the doors trying to leave and Tina pushes one of them down on the floor and begins screaming hysterically, standing in place. Carrie notices her and loosens the bolts on the basketball board, making it fall and hit Tina in the back, making her fall. The board then swings around one more time and releases completely. It then falls on Tina, crushing her to death like a helpless German Shepherd puppy.

In this new adaption Tina is played by Zoe Belkin. Tina is the best friend of Chris Hargensen (Portia Doubleday) and girlfriend of Jackie Talbot. In the beginning of this film Tina is one of the many girls, who harassed Carrie, when she has her period; throwing tampons, chanting ("Plug it up!"), and laughing at her misery. As Christine's second-in-command Tina is always there to patronize Carrie when Christine is not, may that be in an English class or in the hallway. Tina took part in Miss Desjardin's detention and Christine asks, if she will ditch detention with her because Tina has a heart condition. Tina even produced flirtatious advances towards the English teacher Mr. Ulmann, subtly seducing him to join in on bullying and provoking Carrie. Then, at the prom, Tina smuggles Christine and Billy into the prom and counterfeit's the prom votes with the help of of the other friends of Christine and Billy, who are there, making Tommy and Carrie the prom king and queen; putting Christine's plan into action. Once the prank has commenced Tina is there, laughing hysterically at Carrie's misery, until Carrie angrily uses her demonic powers to kill the prom goers. Tina is horrified and scared, as she watches Carrie kill Heather (Samantha Weinstein), the twins (Nicki and Lizzy), and finally her boyfriend Jackie Talbot in cold blood with no remorse. Mr. Ulmann tries to save Tina from Carrie's wrath, but they are both forced to be separated when a flaming crescent moon prop is launched at them by Carrie. Both George and Miss Desjardin watch in horror, as Tina is brutally whipped by live electrical cables like a helpless female German Shepherd before her dress catches on fire from the burning crescent moon, engulfing her entirely in flames like a grilled giant gourami, as she screams in agony and pain, while she dissolves into ashes. 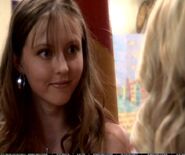 Tina Blake (2013)
Add a photo to this gallery
Retrieved from "https://horror.fandom.com/wiki/Tina_Blake?oldid=131184"
Community content is available under CC-BY-SA unless otherwise noted.