Wes Craven's New Nightmare is a 1994 American slasher metafilm written and directed by original Nightmare on Elm Street creator Wes Craven. Although it is the seventh film in the franchise, it is not part of the series continuity, instead portraying Freddy Krueger as a fictional movie villain who invades the real world and haunts the cast and crew responsible for his films. This was released on DVD by New Line Home Entertainment in January 5, 2006 on double feature Freddy vs. Jason.

Just as the first Nightmare film opened with the creation of Freddy's infamous glove, New Nightmare opens with the creation of an updated, more sinister and sleeker looking glove. As the maker of the claws appears to chop off his own hand in preparation for attaching the claws to his own wrist, the other people on the set wince, and the director, Wes Craven, encourages the effects specialists to pump more blood. Soon he yells, "Cut!! Print that, Gretchen!". Heather Langenkamp with her husband, Chase and their son, Dylan are wandering around the set of the new Nightmare on Elm Street movie.

Presently the claw, which was only a prop a minute ago, comes to life and starts maiming and killing the special effects crew, Dylan disappears into thin air, and, as the claw advances to attack Chase, Heather screams, waking up in her own bed in her own house with Chase, in the middle of an earthquake in Los Angeles. After the earthquake dies down Chase has a couple of scratches, the same as he had received in the dream. This causes Heather to wonder if they were sustained in the earthquake or in the dream.

Heather reveals she has been receiving harassing phone calls from "some deranged fan" acting like Freddy, but they've stopped for the last couple weeks until now. When she gets home, her son has an episode during which he warns her in a voice not his own, "Never sleep again!" Worried, Heather asks Chase to come home. Chase falls asleep at the wheel on the way, and dies in a supposed car crash. When Heather goes to identify the body, it seems, to her, that there may have been more to the crash than meets the eye, mainly the claw marks on Chase's chest. Dylan, now also grief-stricken, continues acting ever more strangely. When Heather takes him to a hospital, the doctors suspect her of being insane and of abusing him.

She goes to Wes Craven for help making sense of what's happening. Craven tells her he doesn't know much more than she does - he dreams a scene or two each night and wakes up and writes them down. He goes on to tell her that in the script he's been writing, pure evil can be temporarily defeated if its essence is effectively captured in a work of art that is able to allow evil to express itself. Craven explains that the evil has taken the form of Freddy Krueger because it is a familiar one. "Freddy" sees her as the gatekeeper who holds Freddy at bay since Heather's character Nancy defeated Freddy in the first movie. To Freddy, it is Heather that gave the character of Nancy her strength. Freddy is attacking her at her weakest points, trying to break her down before confronting her. She leaves as confused as when she arrived. Freddy forces her to accept the role he wants her to play. At the same time, he eviscerates the toy dinosaur Dylan believes has been protecting him and abducts the boy.

The final showdown between Freddy and the mother-son duo occurs in a steamy and water logged dreamscape ruin, apparently Freddy's home turf. Dylan finds Heather, only for them both to be attacked by Freddy, Heather is knocked out, Dylan is left defenseless. Freddy lures Dylan into a trap and tries to eat him, Heather wakes up in time to save Dylan, but Freddy makes his tongue extend and wrap around Heather's face. Dylan gets out of the trap to save her by taking a kitchen knife that Heather brought in with her, cutting Freddy's toungue in half, making his tongue go back to normal size. Even so, the two succeed in killing Freddy and escaping back to the real world. There they find the script of the film Craven has been working on waiting for them. Dylan asks his mother to read some of it to him, which she does: "We open on an old wooden bench. There's fire and tools, and a man's grimy hands building what's soon revealed as a gleaming set of claws. And the claws are moving now as if awakening from a long and unwanted sleep..."

List of deaths in the film, Wes Craven's New Nightmare 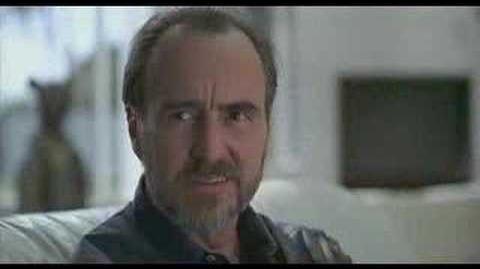 Retrieved from "https://horror.fandom.com/wiki/Wes_Craven%27s_New_Nightmare?oldid=149395"
Community content is available under CC-BY-SA unless otherwise noted.